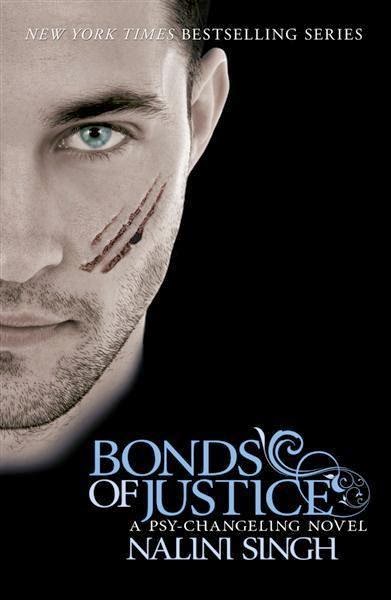 Max Shannon is a good cop, one of the best in New York Enforcement. Born with a natural shield that protects him against Psy mental invasions, he knows he has little chance of advancement within the Psy-dominated power structure. The last case he expects to be assigned is that of a murderer targeting a Psy Councillor's closest advisors. And the last woman he expects to compel him in the most sensual of ways is a Psy on the verge of a catastrophic mental fracture . . .

Sophia Russo is a Justice-Psy, cursed with the ability to retrieve memories from men and women so twisted even veteran cops keep their distance. Appointed as Max's liaison with the Psy, she finds herself fascinated by this human, her frozen heart threatening to thaw with forbidden emotion. But, her mind filled with other people's nightmares, other people's evil, she's standing on the border between sanity and a silken darkness that urges her to take justice into her own hands, to become judge, jury . . . and executioner . . .

Review:
Once again I think I have a new favourite couple in the Psy-Changeling series. Well, Max & Sophia will be my favourites until I read the next book anyway LOL. I say it every time I review one of these books but it's true, the series really does get better and better with each instalment!

Sophia is a Justice Psy which means she has the ability to look through the memories of violent criminals and testify in court to confirm their guilt. Justice Psy see so much horror through their work that they find it incredibly difficult to hold onto Silence and they have to go in for regular reconditioning. Even that only works for so long though and Sophia knows that she doesn't have long left before she will have her mind wiped by the Psy Council, losing every last part of herself. She isn't happy with that outcome but she knows it is inevitable and she's determined to make the most of the time she has left - starting by giving into the attraction she feels to human cop Max.

Max has been working on a horrendous serial killer case and he first met Sophia when she was sent to read the mind of the murderer to try and find the locations of his victim's bodies. Max has a natural shield that stops Psy from being able to read his mind which means the Psy don't trust him and he's never likely to rise through the ranks of the Psy controlled justice system. The last thing he expects is to be called to work on case for one of the Councillors but Nikita's closest advisers are being murdered and she's convinced that another council member is behind their deaths so she needs someone outside of the Psy network to investigate.

I loved both of these characters. Max is a no nonsense type of guy, very much what you see is what you get. When there is something he wants he sets out to take it and he definitely wants Sophia. Sophia is quite different from our previous Psy heroines because she has never really been fully Silent. She's spent her whole life rooting through the minds of the worst kind of criminals and I loved her determination to seek justice for their victims - I can definitely get on board with the Justice Psy's form of punishment! I loved seeing Sophia explore her feelings for Max, the fact that she wasn't shy about grabbing hold of life and fulfilling her dreams made me really love her.

As well as having a wonderful romance between Max and Sophia Bonds of Justice also has plenty of action, lots of interesting developments in the Psy world and some brilliant scenes with some of our favourite characters from previous books. Sasha and Lucas in particular really are so cute together now and I loved seeing how protective Lucas is of his mate, scenes with the two of them never fail to make my heart melt! One of the things I enjoy most about this whole series is the tight knit friendships and bonds between all of the characters and it's always great to get a glimpse of how previous couples are doing after they got their HEA. I absolutely can't wait to carry on reading these books!