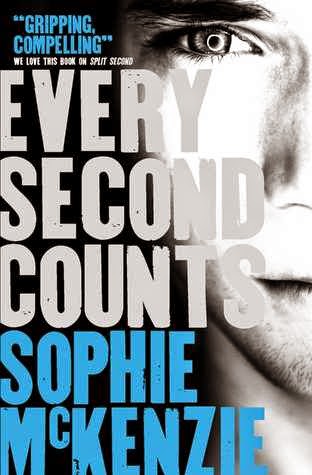 Outlawed teenagers Charlie and Nat are on the run, falsely accused of terrorism and kidnapping. With few people they can trust, they are desperate to bring down their accusers and return to their former lives, but time is running out.

Charlie has a plan that might just save them - but it will only work if she goes alone.

Could being together be even more dangerous than being apart?

Review:
It is impossible to review Every Second Counts without including major spoilers for the previous book so please don't read this review unless you've already read Split Second (you can always find my review of that HERE if you haven't - it's a fantastic start to the series that I would highly recommend). So, if you're still reading I'm going to assume you've already read the first book & if you haven't it's entirely your own fault if you end up ruining the series for yourself!

As we saw at the end of the previous book Charlie and Nat have both been framed by Roman Riley and they're now wanted by the police for terrorism. Proving their innocence isn't going to be easy when Roman is such a powerful political force but that doesn't mean Charlie and Nat aren't going to try. They don't have long before the general elections though and unless they work fast Roman could end up becoming even more powerful than he already is.

Both Charlie and Nat have been through so much since we first met them, they thought they were working to stop the terrorists who killed Charlie's mum and put Nat's brother in a coma only to find out that they had been working for the very people that they hate. How can they show the world what Roman is really up to though? Is there anyone they can trust with the truth and to hopefully fight alongside them? It looks like the only way to get proof of Roman's plans is for Charlie to go undercover, she has a good excuse for going back to him but it won't be easy to pull off the deception. At the same time Nat will try to find backup from the resistance so they are ready to move as soon as Charlie gets hold of the information they need.

Every Second Counts is just as fast paced as it's predecessor and I couldn't put it down. I have to admit that this story felt a little less realistic than the first one, Charlie and Nat seem to get out of so many impossible situations without a scratch on them and it did start to get a little on the ridiculous side. I also felt that Charlie in particular was far too trusting and willing to take things at face value. Nat seemed to have more sense in that regard but even he was led into quite a few traps by not thinking things through properly. As much as I found it hard to believe some of the situations they got themselves into I did find myself really enjoying the ride, if you're willing to suspend belief a little then this really is a very action packed story. It also raises some interesting questions about the balance of political power and the potential for things to go very, very wrong if a leader has bad intentions. Overall I've really enjoyed this duology and would recommend it to anyone who is looking for a fast and thrilling read.