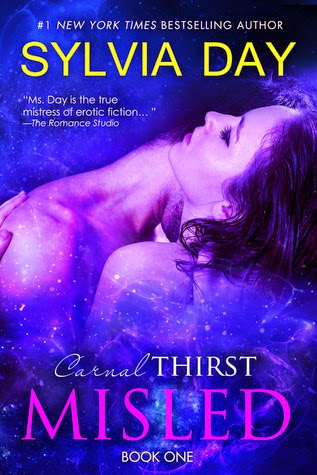 Special Task Force agent Derek Atkinson has a craving for luscious vamp Sable Taylor. But Sable’s a bounty hunter, which makes him direct competition in the capture of wanted criminals. Despite the obvious attraction between them, she won’t give him a chance and after two years, he’s tired of waiting for her to come around.

Sable’s on a dangerous mission. She’s not who Derek thinks she is, so anything personal just isn’t possible. But like most master vampires, Derek’s wily and used to having his way. When he traps her on his ship, she decides to indulge. Two straight days of mind-blowing sex should be enough, but it isn’t, not for either of them. Her heart is involved now, but Sable can’t let Derek get too close. If he finds out what she’s doing, he’ll never forgive her.

Derek, however, refuses to let go.

Now he’s getting shot at and asking questions she shouldn’t answer. Sable has to reveal the truth . . . Derek’s love has been misled . . .

Sable is an undercover agent posing as a bounty hunter while she is working a top secret case, she has been in the field for a long time and has to keep her true identity firmly under wraps so that nobody can discover what she is up to. Derek is also an Agent but he doesn't know that Sable is undercover. They have been attracted to each other for a long time but Sable can't risk starting anything with him in case her cover story is blown. Derek has spent two years trying to capture Sable's attention and he is fed up of waiting for her to notice him which makes him very determined to finally make her listen. He's owed some time off so he sets out to help her capture her latest bounty, and to prove to her what a fabulous couple they would make.

I'm going to be upfront and say that as an erotic romance the focus of this story is definitely sex rather than world building. I'm not saying that's a bad thing, after all it is incredibly hot sex and I definitely enjoyed reading it, but I want to put it out there because if you go into this expecting something else you could be disappointed. These characters spend a lot of their time going at it like bunnies - in bed, up against the wall or on pretty much any solid surface that is available to them - they have scorching chemistry and this story will definitely leave you in need of a cold shower or two. Although sex is the main ingredient there is more to the story and I did enjoy what we saw of the world and getting to know both of the characters.

Misled is a very quick, hot read and it's one I'd definitely recommend when you're in the mood for something spicy. I have to admit I would have loved it to have been longer so it could have had a little more depth but that isn't always what I'm looking for and I'll definitely be picking up the sequel (Kiss of the Night) at some point in the future.