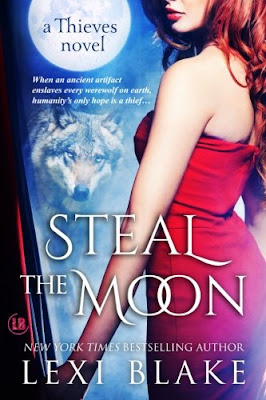 When an ancient artifact enslaves every werewolf on earth, humanity’s only hope is a thief…

Zoey Donovan should be happy. Her love life couldn’t be better, her demonic nemesis is on the run, business is booming, and no one has tried to kill her in seven whole months. But without her best friend to share it with, it all seems a little hollow. Neil, her fabulous furry wingman, is missing and two grumpy werewolf bodyguards have taken his place.

Undaunted by her humorless babysitters, she intends to track Neil down even if it means risking her newfound romantic bliss. But someone else has plans for Zoey, and they don’t intend to play nice. Lucas Halfer is desperate for revenge, and he knows just how to get it.

An ancient Roman legend tells of an artifact that will grant its possessor the power to control all wolves. No one, including Daniel and Dev, believes the Strong Arm of Remus is real but Zoey thinks Halfer might have already located it. With every werewolf pack in North America gathering in Colorado, the demon could enslave an unstoppable army.

To save the day, and possibly the world, Zoey will have to find a way to steal the Strong Arm of Remus from one of the most powerful demons in existence. Then again, impossible is kind of her specialty.

Review:
Zoey finally has her love life more or less on track but she's a bit fed up with being followed around everywhere by the two werewolf bodyguards her lovers have hired to protect her. She's missing her best friend Neil who has been missing for months now so she's extremely worried about his safety and if she has to find ways to get around her bodyguards to go and look for him then that's what she'll do. Even if demon Lucas Halfer is still out for revenge. Daniel and Dev are currently trying to build an alliance with the werewolves but getting an invite to their gathering is proving difficult as they don't trust vampires, Dev may be able to get them in by offering himself and Zoey to perform a fertility ritual for them. That could all go horribly wrong if Lucas manages to get hold of an ancient Roman artefact that he believes will allow him to control all of the wolves. It's up to Zoey and her crew to stay one step ahead and prevent a disaster but that could be easier said than done.

This series is just getting better and better. I love the relationship development in our Zoey / Daniel / Dev triangle, the boys are finally on the same page and have started to rebuild the friendship they had early on in the series. They are working together as a team which is fantastic to see but there are times when they seem to forget that Zoey is an independent woman who is capable of making her own choices. I get their need to keep her safe but trying to keep her wrapped in a bubble is driving her insane and I was so glad to see her stand up for herself and tell them what she wanted and needed. I enjoyed seeing her get back into the action and I really loved the addition of werewolf Lee to her crew. It was also great to see Neil again, he's been through a lot and is in a really difficult place right now but he obviously needs his friends around him and Zoey will do anything for the people she cares about.

This story had plenty of action and some fabulous scenes with the werewolves. I did get a little frustrated with Zoey for paying so little attention when anyone tried to talk to her about the fertility ceremony but it was quite funny to see her reaction when things get started and I liked the way it changed her relationship with Dev. It was good to see her having some one on one time with both of her boys but I think my favourite parts are when they're all together as a happy trio, especially now that Daniel has let himself loosen up a bit! The addition of Dev's twin brother Declan made things really interesting and I'm really curious to see how the rest of his family reacts to their arrival in the next book. I have a feeling things are about to get even more complicated and I can't wait!