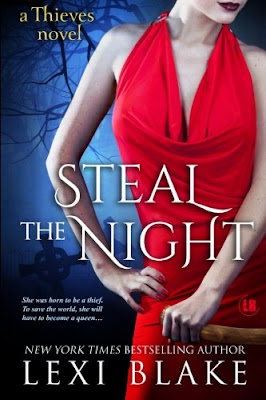 She was born to be a thief. To save the world, she will have to become a queen…

Zoey Donovan-Quinn is growing restless. After months of searching, her crew hasn’t been able to locate the resting place of the one man who could save Daniel. While they frantically continue their quest, Zoey is still struggling to recover from the devastating losses she suffered in Faery. In the midst of her grief and worry, Louis Marini appears and demands the Blood Stone he forced Zoey to steal. Zoey has no other choice than to hand it over.

When the giant ruby’s true nature is revealed, Zoey discovers she has given their greatest enemy a weapon of unimaginable power. Equipped with the Blood Stone, Marini intends to dominate the supernatural world and, on a more personal note, claim Zoey as his companion.

Desperate and on the run, Zoey, Dev, and Daniel forge an unlikely alliance with an old adversary who claims he can lead them to the wizard who can free Daniel from Marini’s clutches and help him claim his throne. As they race to solve a thousand-year-old mystery and gather their forces for the ultimate battle, Zoey prepares to do what she does best.

If Daniel and Dev are to have any hope of victory, she will have to do the unthinkable... surrender to Louis Marini and steal back the Blood Stone.

Review:
Months after returning from the sithein Zoey, Daniel and Dev are still searching for the one person who may be able to save Daniel by removing the silver bomb attached to his heart and until they do that they are completely powerless to do anything to stop Marini and the rest of the vampire council. When Zoey is forced to hand over the Blood Stone to give them more time she unwittingly hands Marini the key to take everything he has ever wanted and now they're in even more peril than before. Now her only choice may be to hand herself over to her greatest enemy in the hope that she can steal the Blood Stone back in time to save the men she loves.

Steal the Night is the final story with Zoey as the main character and it really was a fitting end to her, Daniel and Dev's story. I've loved watching the relationship that has slowly built between the three of them since the beginning of the series and was really pleased with the way things ended for them as a triad. They haven't had an easy time of it and there is more hurt and loss they'll have to get through in this last book but I think they've definitely earned their HEA now.

There was a lot to love about this book, not just the relationship between the three main characters but also Zoey's friendship with characters like Neil and Sarah, her brotherly relationships with Lee and Zack, the alliances they have slowly been developing with the werewolves, fae and some of the vampires and the world that they're trying to build for the future. So many of the side characters from this world had a chance to shine in this book and while some things broke my heart others left me with a huge smile on my face.

While there was a lot I enjoyed about this world and I love the series as a whole there were a few things that stopped this being a 5 star read for me. The main one was how things unfolded with Marini, I really didn't like the way Zoey had to spend so much time with him or the things that happened while she was there, I know the author was trying to show the danger of the world but I found some of those scenes very hard to stomach reading. Then there's the fact that there was very little aftermath for everything Zoey has been through, she seems to forget about everything within seconds whenever either Danny or Dev are around and if you're not going to make her feel the full emotional effects of what she's suffered then I don't think it's worth putting her through it in the first place. I was also confused about the way the story ended with a certain wizard, it looked like he was going to be a major player in the story and I was worried about where that plot was going but then it just completely fizzled out with no resolution. Perhaps that's because we'll see more of his character in the new spin off but for now it just left me feeling confused.

So, while I did enjoy most of this book and I definitely loved this series but I don't think this was the strongest instalment compared to the first four books. I'm really looking forward to starting Ripper though, I can't wait to meet new character Kelsey and I'm very excited that Marcus is going to play a larger role in the spin off because he's been a brilliant side character so far.