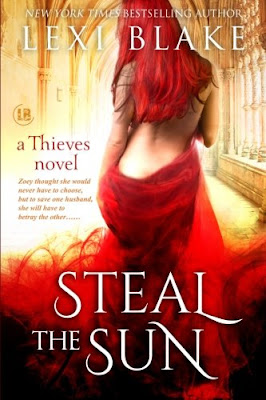 Zoey thought she would never have to choose, but to save one husband, she will have to betray the other…

As Zoey Donovan-Quinn first sets foot in the faery homeland of her beloved Devinshea, life is perfect. Her enemy is defeated, her heart is full, and Neil and Sarah are at her side. Daniel and Dev are happy, so their visit to the sithein should be a pleasant honeymoon full of wonder and joy. Well, except for the part where Zoey needs to steal an ancient gem from the Queen of Faery in order to prevent Louis Marini from killing Daniel.

Reunited with her whole crew, stealing the magical artifact should be relatively easy, but unknown to Zoey, Dev, and Daniel, there are dark forces gathering against them. As her search for the Blood Stone gets underway, Zoey makes a startling discovery that will change her life, and Dev and Daniel’s forever.

When her new enemy finally strikes at Zoey from the shadows, her newfound happiness is shattered, and to avenge the horrific attack, Dev prepares his mother’s kingdom for war. Recovering from the attempt on her life, Zoey and Daniel desperately search for the stone and in the process unmask the real monster behind the assault.

Stopping the real threat, and saving Daniel, will force Zoey to choose sides in an epic war between the Seelie and Unseelie Fae, even if it means betraying Dev and his people.

Review:
Zoey and her husbands arrive in faerie unsure of the welcome they'll receive but Dev is treated like a returning hero, even by the people who looked down on him before he bonded with the god Bris, Zoey is considered an unworthy consort to their priest while Daniel is a curiosity that the fae aren't too sure what to do with. Zoey has been tasked with stealing the blood stone to save Daniel's life but as tensions increase between the Seelie and Unseelie the entire group is in danger and this time not everyone will survive.

I'm still really enjoying this series and I'm loving the overall relationship development between Zoey, Daniel, Dev and now Bris, they have come a long way together and are learning to trust each other and to work as a team. Daniel and Dev are getting on better than ever but they do still have a bit of a tendency to bulldoze ahead with their plans without really taking Zoey's opinion or wishes into account, they're better than they used to be but they still need to work on it. Zoey has a bad habit of keeping secrets or sneaking out without backup because she knows they'll try to stop her so really they all make mistakes in this one even when you can see what they're trying to do.

I really enjoyed this story being set in the sithein and getting to meet more of Dev's family, Declan is still a bit of an ass but we do see a different side to him and it's obvious he misses his twin and wants to be close with Dev again. There are quite a few new interesting characters to meet and we also have the whole gang back together so we get to see plenty of Neil, Lee and Sarah which is always a bonus.

It wouldn't be Zoey if she wasn't finding trouble somehow so you just know that her task of finding the blood stone isn't going to be as easy as it seems and with a war brewing things are getting more dangerous than ever. One part of this book was quite tough to read and really broke my heart, it was a very emotional event for everyone involved and grief caused them all to act in ways they wouldn't normally so they do go through a bit of an emotional hiccup for a while there while they're all coping with events in their own way.

I was really happy with the progress on the overall series arc though and I can't wait to see what awaits the gang next in Steal the Night.