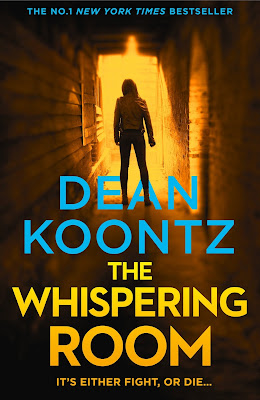 The second gripping thriller in an exciting new series featuring FBI agent Jane Hawk, from the master of suspense and New York Times No.1 bestselling author.

‘Do what you were born to do’

These are the words that ring in the mind of a mild-mannered and beloved teacher as she drives a car full of burning gasoline into a hotel. This catastrophic act of terror, which kills herself and many others, is deemed to be the tragic death of someone who was clearly insane.

But rogue FBI agent Jane Hawk knows the truth. In the wake of her husband’s inexplicable suicide, she picks up the trail of a secret cabal of formidable players who are bent on obtaining world power with a terrifying piece of technology.

Driven by love for her husband and fear for her five-year-old son who she has sent into hiding, Jane has become an unstoppable predator. Those she is hunting will have nowhere to run when her shadow falls across them.

Review:
The Whispering Room picks up Jane's story and continues the relentless, edge-of-your-seat action from The Silent Corner. It takes us deeper into dangerous territory as Jane works harder than ever to uncover exactly who is behind the increasing suicide rates and the terrifying nanotechnology she's discovered. Her son is at risk and that means she will do whatever it takes to end this conspiracy, or she'll die trying.

It's so hard to go into much detail about this series because I honestly don't want to give anything away but this is Dean Koontz at his best. I think what makes it so frightening is that it really isn't that hard to imagine that this technology exists, or at least could do in the very near future, and it's definitely not hard to believe that the powerful and wealthy elite are willing to use that technology to further their own agenda without a care for the normal working class people it affects the most.

Jane is a fantastic character, she's smart and absolutely ruthless when it comes to uncovering this conspiracy. She knows the only way to protect the people she cares about is to bring this out into the open and put a stop to it but she's in such an impossible situation and she has no way of knowing who can be trusted. She has great instincts though and she's not the only one who has reason to be suspicious of recent events so she picks up a few allies along the way.

This series is definitely one I can't wait to continue and I'm glad we have two new books to look forward to in 2018!