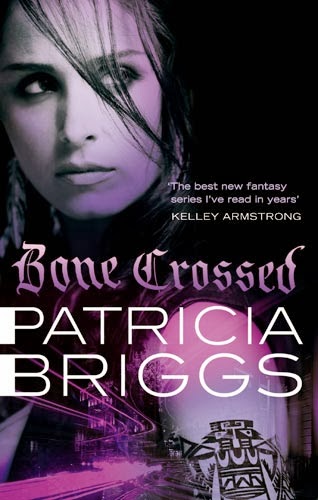 There was I thinking being a shifter had its upsides. Looks like I was wrong.

Car mechanic and sometime shapeshifter Mercy Thompson has learned - the hard way - why her race was almost exterminated. When European vampires emigrated to North America, they found Mercy's people had a hidden talent for vampire slaying. Unfortunately for Mercy, the queen of the local vampire seethe has discovered her true identity.

The undead queen is also furious when she learns Mercy has crossed her and killed one of her own.  Mercy may be protected from direct reprisals by the werewolf pack (and her interesting relationship with its Alpha), but that just means Marsilia will come after Mercy some other way.  So Mercy had better prepare to watch her back.

Review:
When Stephan appears in Mercy's trailer on the verge of death she discovers that Marsilia (queen of the local vampire seethe) has found out about the vampire that Mercy killed.  To say that Marsilia is unhappy is an understatement.  Stephan has been thrown out of the seethe for helping keep Mercy's secret & Marsilia wants blood - preferably Mercy's but she is happy to target her friends too.  With Adam & Samuel determined to keep her safe it looks like this could be the start of a war between the werewolves and the vampires.  When Mercy's friend from college Amber turns up asking for Mercy's help dealing with a ghost everyone thinks this would be the perfect way to get Mercy out of Marsilia's reach.  But nothing is as it seems and Mercy soon finds she has jumped out of the frying pan straight into the fire.

I'm a big fan of Patricia Briggs and love the Mercy Thompson series so was really looking forward to reading Bone Crossed & I wasn't disappointed.  I love Mercy and was devastated for her at the end of the last book so I really wanted to know how she was getting on.  A week after the ending of Iron Kissed Mercy is in a mess both emotionally and physically, suffering regularly from panic attacks and flashbacks of the event.  She knows she loves Adam but she is finding it hard to allow him to get close to her and I felt her reactions were very realistic considering what she has been through.  I've always had a soft spot for Adam but he is so patient and caring towards Mercy in this book that I couldn't help liking him even more.  He understands what she is going through and is determined to help her recover.

Spending time in Mercy's world is like visiting with friends and I always find myself easily slipping into her world like I never left.  I love each of the characters in their own ways and even the more minor characters like Jesse and Warren are so well rounded that it feels like you actually know them.  If I had one minor disappointment it was that I would have liked to have spent a little more time with Stephan in this installment of the series, especially as the main plot revolves around the vampires.  He suffers so much in Bone Crossed and I hope we get to see how he deals with the things Marsilia has done over the next few books.  We didn't see that much of Samuel either but that was more understandable considering the plot but we get to see a lot of Adam so that makes up for it!

If you're yet to discover the Mercy Thompson series then I would highly recommend it to urban fantasy fans.  It is one of my favorite series and Mercy is a fantastic heroine.  Although you could probably read this as a stand alone novel I would strongly recommend reading the series in order so you don't miss any of the back story.  If you're already a fan of the series & haven't already read Bone Crossed what are you waiting for?  This was probably my favorite book in the series so far so I'm sure you're going to enjoy it!