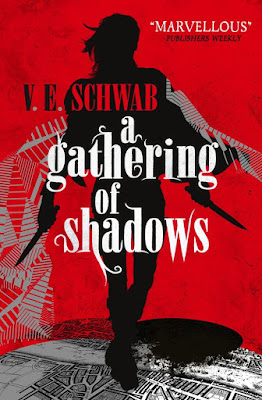 Kell is one of the last magicians with the ability to travel between parallel universes, linked by the magical city of London. It has been four months since a mysterious obsidian stone fell into his possession and he met Delilah Bard. Four months since the Dane twins of White London fell, and the stone was cast with Holland's dying body back into Black London.

Now Kell is visited by dreams of ominous magical events, waking only to think of Lila. And as Red London prepares for the Element Games - an international competition of magic - a certain pirate ship draws closer. But another London is coming back to life. The balance of magic is perilous, and for one city to flourish, another must fall . . .

Review:
I absolutely loved A Darker Shade of Magic so of course A Gathering of Shadows was one of my most anticipated books of 2016, I couldn't wait to dive back into this world to catch up with Kell and Lila and I had incredibly high hopes for this story. Perhaps my expectations were a little too high because I certainly came away feeling disappointed. I won't go as far to say AGOS is a bad book but it definitely suffers from second book syndrome and in no way lives up to it's predecessor. The pacing was off in this book and the story dragged, and I mean it REALLY dragged. It took me 9 whole days to finish it because I would read a couple of chapters and make an excuse to put it down and do something else, then I'd have to force myself to pick it back up again later. Things do pick up in the last third but then you are hit in the face with a giant cliffhanger so I can't even call the ending satisfactory.

The beginning of the story sees Lila off looking for adventure like she promised she would at the end of the previous book, she's managed to earn a place on the crew of a pirate sorry privateer ship and she's having a brilliant time exploring the world and finding new ways to steal from people. She's also started learning magic under the supervision of the ship captain Alucard (who is a brilliant new character by the way, he was probably my favourite thing about the whole book!). The trouble is Lila has started to get comfortable in her new life, she's actually started to feel settled and even to consider the crew as friends and that is making her very nervous. Lila doesn't do well with routine or friendship and she decides that she's going to have to make her excuses and leave so when Alucard announces that they'll be returning to Red London for the Essen Tasch, the world's greatest magical tournament, she decides that's a perfect time for her to start yet another new life for herself.

I absolutely loved Lila in the first book and even at the beginning of this one I was praising her for her cocky and self assured attitude because she has always had the skills needed to back up any claims she makes. Lila has the kind of adventurous spirit that means she's always getting into trouble but that doesn't bother me because she nearly always has a plan to get herself back out again and her adventures along the way are so much fun to read about. No matter how much I love her she did start to annoy me in this book though, she grew up in Grey London and didn't have even a tiny amount of magical ability or training until she came to Red London four months ago yet she decides she deserves a place competing amongst the best trained magicians in the whole world. She doesn't even know the rules of the game yet she thinks she has a right to be there competing even though the competitors were chosen months ago.

I don't think I'd have minded so much if she had earned her spot in the contest, in fact she could have even won it by cheating another magician in a card game and I'd have cheered her on from the sidelines. Instead she attacks a complete stranger with absolutely no plan and no idea how she is going to keep him out of the way for the entire contest. What the hell would she have done if Alucard hadn't turned up out of nowhere and found a solution for her? Would she have gone so far as killing the rightful competitor just to take his place? That whole situation left a very bitter taste in my mouth and I still haven't forgiven her for it. That's without thinking about the way she suddenly has the skills to compete in a magical battle against magicians who have trained for YEARS when she's not had a single day of training to fight in a magical duel. She supposedly picks up everything she needs to know from watching the couple of fights before her own match. Up until that point Alucard has been teaching her the basics of how to control the elements and she's been struggling with that so you really expect me to believe she's now a brilliant fighter using nothing but her magic to attack and defend herself? You have got to be kidding me.

So Lila's side of the story started well but went downhill rapidly and left me with a pretty low opinion of her but what about Kell? Kell's whole world has been turned upside down after events at the end of the previous book, his life has forever been bound to Rhy's and he is the only thing keeping the prince alive. The King and Queen also blame him completely for everything that went wrong and they're now treating him worse than ever. So Kell has every right to be upset and angry but it does mean that he spends a lot of his time moping around and feeling sorry for himself. I could completely understand why that was but it doesn't make for very interesting reading. I do love the bond between him and Rhy though, the boys are closer than ever and Rhy is determined to do whatever it takes to pull Kell out of his black mood - even if it does mean secretly entering him into the Essen Tasch, something which is strictly forbidden since Kell is so powerful. At least Kell has the skill needed to make his spot in the contest valid though and I actually really enjoyed seeing him go into battle. His side of the story picked up dramatically when the Essen Tasch started and it was nice to see a more positive side to him that had been missing earlier on.

So there were parts of this story that I enjoyed immensely but there were others that either made me really angry or completely indifferent to the characters. We are also hit with a KILLER cliffhanger at the end of the story. There are two different types of cliffhangers, ones that leave you feeling like you had a decent ending to the book but still make you desperate to get your hands on the sequel or ones that make you want to throw the book across the room and vow never to start reading another series by this author until all the books have been published. Unfortunately for me this was of the second variety. I understand that authors want to hook readers in so that we'll buy the next book but I'll do that anyway if I love the characters and the world building. A Gathering of Shadows reads more like a very long prequel to the third book in the series than a story in it's own right. It's a filler book in which very little actually happens and I'm sorry to say it but I'm disappointed. Will I read the next book? Of course I will, I loved the first book so much and I'm still really invested in these characters so I want to find out what happens to them. I'll be waiting for confirmation that it's definitely a trilogy before starting the next book though, if it's going to be a longer series then I'll wait until all the books are available before I carry on reading.