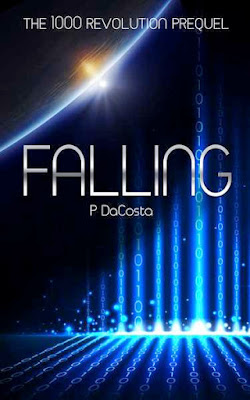 Caleb Shepperd is a fixer. He'll do anything for credits.

When he's hired to track and kill a woman who's muscled in on a dangerous smuggler's territory, he figures it's just another day in the black...Until he's trapped in a silo with his mark.

'Just another day in the black' could turn out to be his last day alive.

A short story prequel to the bestselling science fiction series 'Girl From Above ~ The 1000 Revolution'.

Can be read at any time before, during, or after any of the main books in the series.

NOTE: This is a short story of approximately 35 pages.

*Originally published in The Galaxy Chronicles 2015 (since modified for re-release).

Review:
I absolutely love Pippa DaCosta's 1000 Revolution series so of course I was excited when I found out she had released this prequel short story. If you've ever wondered how Caleb and Fran met and ended up working together then Girl From Above: Falling is a must read.

This is only a short story but it packs a lot in and I think it's a fabulous introduction to the series so if you've been unsure whether to read it or not this free read should help you make up your mind. The series is so much fun to read, the characters are a completely morally ambiguous bunch who are just as likely to stab each other in the back as they are to offer everlasting friendship but that makes them all the more fascinating. You really never can tell what to expect next, tentative truces can be destroyed in a moment and then you'll see enemies working together against an even greater foe but as soon as the threat is dealt with then all bets are off again.

My only disappointment with this story was that we didn't get to see #1001 since she's one of my favourite characters but I loved finding out a bit more about Caleb and Fran's history together and it's left me wanting to reread the rest of the series.

Source: You can get this short story for free by signing up to the author's newsletter