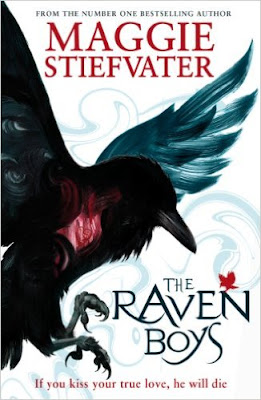 Blue has spent the majority of her sixteen years being told that if she kisses her true love, he will die. When Blue meets Gansey’s spirit on the corpse road she knows there is only one reason why – either he is her true love or she has killed him.

Determined to find out the truth, Blue becomes involved with the Raven Boys, four boys from the local private school (lead by Gansey) who are on a quest to discover Glendower – a lost ancient Welsh King who is buried somewhere along the Virginia ley line. Whoever finds him will be granted a supernatural favour.

Never before has Blue felt such magic around her. But is Gansey her true love? She can’t imagine a time she would feel like that, and she is adamant not to be the reason for his death. Where will fate lead them?

Review:
I'm a massive fan of Maggie Stiefvater but, for possibly the first time ever, I actually managed to hold off on starting a much anticipated series until just before the release of the final book. No year long wait between each new instalment can only be a bonus, especially when it means I can read the whole series over the space of a couple of months (I'm reading with a group of friends & we're reading one book every 2 weeks otherwise I'd probably have devoured the entire series in one massive long binge). I didn't have any doubts that I would love this story because I already know how beautifully Maggie writes but I went in knowing pretty much nothing about the story or what to expect from it.

The Raven Boys is very much a character driven story and it has such wonderful characters at the wheel that you'll be hooked in no time. Blue was my personal favourite, as the only non-psychic in her family she has been raised to believe in the paranormal but she's never seen it for herself. Blue is smart, independent and she follows her own path even if that means she never quite manages to fit in amongst her peers. She is also living with a dire prediction over her head, one that means if she ever kisses her true love he will die so that obviously makes even the idea of dating just a little bit difficult. While Blue never doubts the abilities her mother and the other women they share their home with she is desperate to experience some kind of magic for herself so it's no surprise that she's drawn to Gansey and his band of adventurers.

Gansey, Adam, Ronan and Noah are all Raven Boys, known as such because their school crest is a Raven. Aglionby is a boys school for the wealthy elite (as well as the occasional scholarship student) it's the kind of school that gives students the best education money can buy and almost guaranteed acceptance into the most prestigious colleges out there. Each of the boys is attending the school for different reasons and they all undoubtedly bring their own baggage to the party but Gansey is the central character that the other boys seem to revolve around. He is the glue that holds them all together and it is his obsession to find the Ley lines, along with something he believes has been hidden along them. The others aren't so interested in the Ley lines for themselves but want to help Gansey achieve his goals.

I loved all four of the boys in different ways, Gansey can be pretty hopeless in social situations because he is so stuck inside his own head that he is often oblivious to what is going on around him but he has a strange kind of magnetism and he's the kind of guy that people would follow anywhere. Adam is probably the most normal of the bunch but he is dealing with a very difficult situation at home that is quite heartbreaking to read about. He wants to deal with things on his own terms and I do respect him for that but at the same time it was frustrating to watch him constantly refuse the help he desperately needed and that his friends were willing to offer. He has a bit of a chip on his shoulder as far as money goes and even though I could understand where it was coming from it did get a bit irritating to read about. Ronan is the brooding mysterious one with an anger problem, at first glance he's the boy your parents warned you to stay away from but that's probably what makes him so fascinating. I want to dig deeper and uncover his secrets and we've already had a glimpse that he's not quite as tough as he pretends to be. Noah spends most of his time in the background but the others rely on him to help keep the peace. I don't want to say too much about him but he was the character who surprised me the most and I just want to climb into the book and hug him!

It's not surprising that Blue is drawn to the boys and their quest is something she is in a unique position to help them with thanks to her family abilities. She also knows things about them that they are completely unaware of and there are things she is determined to stop from happening. This isn't a fast paced story, instead it's one that takes time to fully develop the various characters, but that doesn't mean nothing happens. In fact there are some brilliantly vivid and creepy scenes and we're only just beginning to scratch the surface of the mystery surrounding the Ley lines. I can't wait to see where their investigation takes them next and events at the end of the story have definitely set things up for future instalments.