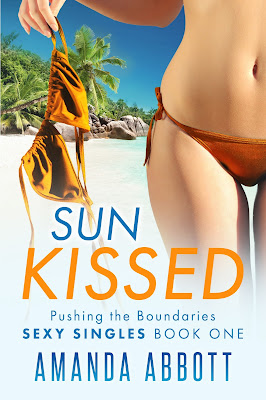 Mallory Baldwin is a model who specializes in not taking herself too seriously. She’s sarcastic, crass, and loves a good joke. She’s been on the brink of making it since she was thirteen, and after learning that yet one more major brand has passed her up for another, good news arrives in the form of a gift. Her pal, Antonio Rafferty, a hotshot investor, has decided to send her to his elite private dating island for free. Fun in the sun, along with plenty of sexy distractions, are exactly what she needs to take her mind off her slumping career.

Patrick Conrad has been playing hockey since he could walk. After signing with Detroit, an injury lands him on the bench after the best season of his career. So when his college buddy, Antonio, enlists him to help out as a deep sea fishing guide in a new brand new business venture for a few weeks, Patrick accepts. A little break in his routine will do him good.

Sparks fly when Mallory jumps into Patrick's life unexpectedly. Things heat up quickly, but they both desperately try to keep their identity from the other.

That is, until the paparazzi arrive.

Pushing the Boundaries Series:
What Caroline Wants
What Piper Needs
What Emma Craves
What Gillian Desires (release date to be confirmed)

Review:
Mallory needs a break, she loves her career as a model but is disappointed that after 10 years of hard work she still hasn't reached the level of supermodel and with her birthday fast approaching she's feeling a little down about it all. When her friend offers her a week long all expenses paid trip to his remote island resort she jumps at the chance, especially since it's a dating resort designed to cater to every whim of the rich and famous singles it hopes to attract. Mallory is more than ready for a week of no strings fun and nothing is going to stop her from enjoying every minute of it.

It's funny because I wasn't Mallory's biggest fan when she was a side character in What Emma Craves but I really loved her here. She's such a down to earth girl and even though she's a beautiful and world famous model she doesn't act anything like you'd expect her to. Mallory doesn't take herself too seriously, she likes to have fun and in attitude she's more like the girl next door than someone you'd expect to find on a catwalk. I love how nice she is and how she seems to have time for anyone, she's just as happy chatting with the bartenders as she is talking to the elite clientele.

Patrick is hockey player who was in the middle of the best year of his career before he was injured, now he's at a loose end while he heals up enough to get back on the ice. His friend was in desperate need of staff to help out at his island resort's first week and Patrick was happy to help. He's supposed to be there to captain the island's pleasure fishing boat but when he realises how short staffed they are he's happy to help out behind the bar too.

When they first meet Mallory assumes that Patrick is just a normal bartender, she doesn't follow sport and has absolutely no idea that he's famous in his own right. That doesn't bother her in the slightest though and she quickly starts to fall for his charms. Patrick has been let down by women in the past and is sick of worrying that everyone he meets is only interested in him because of his money so it makes a refreshing change to be with someone who knows nothing about it. To be honest he's never heard of Mallory before either, even though his fellow bartender has let slip that she's a model, so they're in the same boat really. These two fit really well together, they have fantastic chemistry but they also have fun together. We get to see them spending time together just hanging out and having a laugh which is something that always makes romances feel so much more realistic and believable.

I would have loved for this story to be longer, it was satisfying as it was but I loved them both so much and would have happily spent more time with them. Their romance does move forward very quickly, they're only on the island together for a week after all, but I still found it completely believable and I was rooting for them to make it. There was a moment when I worried we were going to get some unnecessary drama but thankfully both Mallory and Patrick are adults and they immediately discussed a situation that wasn't at all what it looked and it didn't cause a single problem. I can't even tell you how happy that made me!

Sun Kissed is the first book in the Sexy Singles series, a spin off from the Pushing the Boundaries series, so I have to admit I was expecting it to be a little spicier than it was, we still get plenty of smut but it seemed a little toned down here. That's not a bad thing though and I think I'm going to end up loving this series just as much, we've already met Charlotte and Antonio who are going to be the main couple in the next book and I'm definitely looking forward to their story.