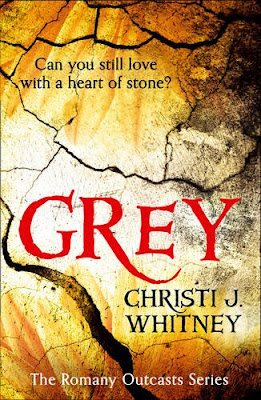 Can you still love with a heart of stone?

But when Romany gypsies arrive in town, Sebastian discovers that his world is not what it seems. There is an age-old feud between his family and the gypsies – and this isn’t the only secret his brother has been keeping from him. His life is not his own. The girl he’s been dreaming about has just turned up at school, and he feels compelled to protect her at all costs.

Even if that means life might never be normal again.

Review:
Sebastian is a normal teenager, all he wants to do is hang out with his friends and get a decent grades in school until he's old enough to apprentice as a tattoo artist in his brother's shop. The only weird thing in his life are the recurring dreams he experiences of a gypsy girl dancing around a campfire but he's sure that is nothing to worry about. Until the day Josephine, literally the girl from his dreams, walks into his class at school that is.

Josephine is a performer in the Circe de Romany, a travelling circus owned and run by romany gypsies. The circus is stopping in Sebastian's hometown for a few months and so Josephine and her brother will be attending his school while they're in the area. The two are thrown together when they are both given main roles in the school play but Sebastian quickly notices some huge changes in himself whenever Josephine is around. It soon becomes clear that there are secrets in Sebastian's family and that nothing about his life, or his past, is quite what it seems and now Sebastian is thrown into a dark world with danger at every turn and no idea who he can trust.

For a start I have to mention how much I enjoyed reading a story from a male POV, so many YA tales are written from the girl's perspective so it was really nice to have the chance to really get inside Sebastian's head and understand what he was feeling. Initially I loved the bond he shared with his brother Hugo and the other tattoo artists that worked alongside him, they seemed like a great team and I loved how close the brothers were in spite of the age difference and the fact that Sebastian was adopted into the family. That all changed when we realised Hugo was keeping so many secrets though, poor Sebastian's whole world was being turned upside down and I found it incredibly frustrating that Hugo wouldn't tell him anything. At first I thought that Hugo was trying to protect him but before long it had me doubting Hugo's motives and it really annoyed me. I understand the need to reveal things slowly so that readers are kept in suspense but I think things were dragged out a little too far in this case and it just started to get on my nerves.

I also wasn't sold on the idea that Sebastian was in love with Josephine, he barely knows the girl, I certainly can't tell you anything about her apart from the fact that she's a gypsy and performs in a circus. I'm not even 100% sure what kind of act she has except I think it involves dancing. Sebastian spends far more time thinking about how beautiful she is and mooning over her than he does actually talking to her. In fact most of the interactions they do have consist of him behaving like a complete idiot so it's very hard to believe that she would be interested in him either. I just needed a lot more time spent showing the two together in normal situations to believe they have any hope of falling in love.

In spite of that I did like Sebastian's character, he has an awful lot thrown at him in a very short space of time and he copes with it surprisingly well. I can't really say too much because I don't want to give spoilers but his whole world is turned completely upside down and all of his plans for the future will have to go completely on hold. The world building was interesting and I am very curious to see how things play out now that Sebastian knows more about his family history. Hugo had even started to redeem himself a little towards the end so I'm hoping we'll get to see more of that protective side of him as the series continues. Grey wasn't perfect but it was enough to pull me in and leave me wanting to know more so I'll definitely be keeping an eye out for the sequel to release. The series has a lot of potential and I hope it ends up living up to it.