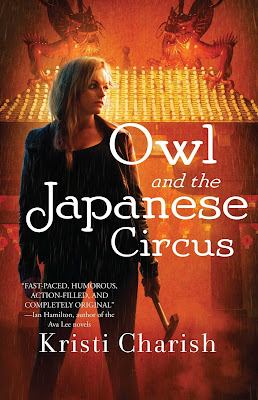 Ex-archaeology grad student turned international antiquities thief, Alix—better known now as Owl—has one rule. No supernatural jobs. Ever. Until she crosses paths with Mr. Kurosawa, a red dragon who owns and runs the Japanese Circus Casino in Las Vegas. He insists Owl retrieve an artifact stolen three thousand years ago, and makes her an offer she can’t refuse: he’ll get rid of a pack of vampires that want her dead. A dragon is about the only entity on the planet that can deliver on Owl’s vampire problem – and let’s face it, dragons are known to eat the odd thief.

Owl retraces the steps of Mr. Kurosawa’s ancient thief from Japan to Bali with the help of her best friend, Nadya, and an attractive mercenary. As it turns out though, finding the scroll is the least of her worries. When she figures out one of Mr. Kurosawa’s trusted advisors is orchestrating a plan to use a weapon powerful enough to wipe out a city, things go to hell in a hand basket fast . . . and Owl has to pick sides.

The Adventures of Owl:
Owl and the Japanese Circus
Owl and the City of Angels
Owl & the Electric Samurai (2016)

Review:
Owl used to be an archaeology student but now she's an antiquities thief and a very good one at that. If there is treasure hidden in a tomb somewhere and you want to acquire it Owl is your girl but at the moment you might find she's a little distracted by the vampires that are trying to murder her in revenge for an unfortunate accident. Staying one step ahead of the vampires is exhausting and not likely to be something she can manage for any length of time without help but there isn't really anyone she can turn to. Until she is approached by Mr. Kurosawa, a dragon shifter who owns a popular Las Vegas casino, that is. Mr. Kurosawa has a small task for her and if she can find an artifact that was stolen from him 3,000 years ago he has promised to deal with her vampire problem permanently. Either way he'll keep them off her back while she's working so it's not really an offer she can turn down.

Owl and the Japanese Circus is a promising start to Kristi Charish's first series, there are definitely a lot of things to like about the world she has created and I enjoyed this enough to want to pick up the sequel. I really liked the author's take on vampires, it can be hard to come up with something different in such a saturated market but she managed it, and the whole supernatural underground has a lot of potential, we've already met several different species and I'm sure there are more to come as we continue to explore the world with Owl. I also really enjoyed the Indiana Jones feel to the treasure hunting parts of the story, I actually would have liked to see Owl spending more time exploring ancient sites searching for clues but I was satisfied with what we've had so far.

Where things went slightly wrong for me was actually with Owl and that's a potentially huge problem. I liked her a lot in the beginning but the more time we spent with her the more she seems to come across as stupidly stubborn and a little childish. She makes quite a few stupid mistakes and I was incredibly annoyed with the way she treated the people closest to her, especially her kind of boyfriend Rynn (more on him later). I absolutely hated the names she called him, particularly when the first time it happened she really hurt him but then she continued to use the same names deliberately as a "joke". It wasn't funny the first time Owl so it sure as hell wasn't funny the second, third or fourth time either. I get that Owl doesn't spend much time with people, she's always been a loner and even though she is fairly close to her best friend Nadya they don't spend much time together so she's more than a little socially awkward. That excuse holds up to a point but when you keep making the same mistakes over and over again then the excuse starts wearing very, very thin. Learn from your actions and change them next time please. I do have hope that Owl will grow as the series continues, after all it's no fun if main characters start out perfect, the whole point of reading a series is that we get to see the characters improve, but she's going to have to make a few big changes fast or I doubt I'll get beyond book 2 and that would be a real shame.

Now I've got that little complaint out of the way let's get back to the positives. First and foremost I absolutely loved Owl's main sidekick, her Egyptian Mau cat called Captain. Captain has been trained to hunt and kill vampires and he just added so much fun to the story. I actually have a bit of a soft spot for feline sidekicks so that's definitely an easy way to get bonus points from me! I also liked Nadya who I think must have the patience of a saint to put up with Owl sometimes. Then you have Rynn, now he is a character I want to spend more time with! As far as book boyfriends go Rynn is pretty much spot on, he's hot, he's protective, there is a lot more to him than meets the eye and he has that bad boy charm that comes from being dark and mysterious. I love that we've already uncovered a few of his secrets but I'm sure there is a lot more to come from his character too.

Overall, I do think this was a positive start to the series and I'm definitely planning on reading Owl and the City of Angels to see what happens next. If Owl can just make a concerted effort to be a bit nicer to the people around her then I think I'm going to end up loving this series.