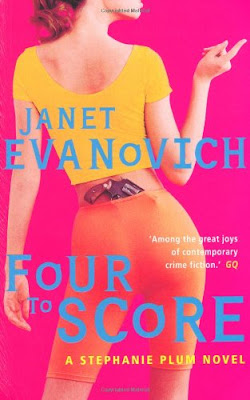 The problem with being a bounty hunter is it's all on-the-job training. And Stephanie Plum is still learning the ways to get yourself killed. Take the case of Maxine Norwicki . . .

When Maxine failed to turn up for her day in court, Stephanie was given the task of bringing her in. Simple. Except Maxine's boyfriend has now begun receiving mysterious, coded notes from the runaway that hint at buried treasure.

In fact the notes are so indecipherable that Stephanie has to call on the help of Sally Sweet, giant drag queen and code-breaker extraordinaire. And Steph's knight errant, cop Joe Morelli. is also proving useful - although he can't decide what he wants most: Maxine's bounty or Stephanie's body.

Meanwhile a friend loses a finger, a mother is scalped, an apartment is firebombed and a store clerk is murdered. And out in the street, the crazy treasure hunt game goes on . . .

Review:
When Stephanie is asked to hunt down a waitress who skipped bail after stealing her ex-boyfriend's car she thinks it'll be easy. That's before the ex-boyfriend offers her extra cash on the side if she'll tip him off to Maxine's location before the cops get involved though. It turns out that Maxine has been leaving clues for her ex and now Stephanie finds herself on a crazy treasure hunt trying to figure out what Maxine is really up to. When Maxine's friend loses a finger and her mother gets scalped the chase really starts to heat up and it looks like Maxine is in a lot more danger that Stephanie could have imagined.

I really struggle to write reviews for this series, not because I don't love these books but because I just want to rave like a lunatic about how fantastic they all are. The main trouble is that I've probably said it all before, I adore these characters, they're all over the top and completely stereotypical but absolutely brilliant in spite of that (or possibly because of it). These characters are larger than life, funny as hell and all of the books make me snort with laughter. If you enjoyed the previous books then you're bound to love Four to Score too, I'm on at least my 3rd read through of the earlier books in this series and that probably says more about my love for these books than anything else could. It's a series that I continuously go back to when I need something that is going to put a smile on my face.

Stephanie is just as out of her depth here as ever, but she always manages to come out on top no matter how crazy the situations she lands in are. Grandma Mazur and Lula are two of my favourite fictional sidekicks but here we have the addition of transvestite Sally Sweet who I really hope is going to become a cast regular (it's been so long since I read these books last that I really can't remember if he crops up again later but I'm keeping my fingers crossed). We also have two great guys to swoon over and after all these years I'm still not sure if I can choose a favourite. Things are progressing well between Stephanie and Joe Morelli though and we even get to meet his family in this book. His grandmother is one scary lady and I certainly wouldn't want her giving me the evil eye! Ranger is still around too and I love the friendly flirtation between him and Stephanie, I don't think it'll ever go anywhere but I enjoy it all the same and who doesn't like to daydream about a batman type of superhero? These books are pure entertainment, perfect for when you're in the mood for something light hearted, a little bit silly and guaranteed to make you giggle and I don't think I'll ever get bored of spending time with Stephanie and her friends!