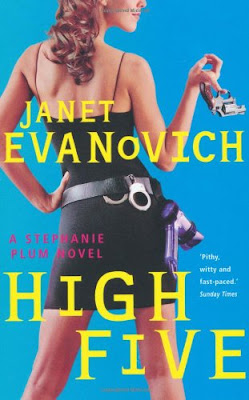 Stephanie Plum has a whole lot of trouble on her doorstep.

Her Uncle Fred has disappeared and Grandma Mazur is convinced he's been abducted by aliens.

Meanwhile, cousin Vinnie has asked her to bring in the vertically challenged Randy Briggs who's jumped bail. But instead of coming quietly, he has taken up residence in Stephanie's closet. The mysterious man called Bunchy is trailing Stephanie in the hope of tracking down Fred. And Benito Ramirez is back from jail, quoting Scripture and vowing to introduce Stephanie to God - face to face.

Thankfully Joe Morelli, the irresistible cop, is still around to give her the odd sleepless night - though he now faces tough competition from the enigmatic Ranger . . .

Review:
Stephanie doesn't have the best of luck but she's reached an all time low in this fifth instalment of the series. Things are on the rocks between her and Joe Morelli, her favourite stalker Benito Ramirez has been released from prison and gone straight back to hunting her, she's completely broke and nobody seems to be skipping bail right now so work is hard to come by. To top it all off her uncle Fred is missing and she's now obliged to spend her time trying to track him down, something that won't help her financial situation as it's a job she won't be paid for. Thankfully her fellow bounty hunter and mentor Ranger throws her a lifeline and offers her a side job working for Rangeman Enterprises but that's only going to make things more complicated, especially when Ranger turns the charm on full force.

The Stephanie Plum series is so much fun to read and I think that High Five was the funniest book yet, I giggled so many times when I was reading this thanks to Stephanie's disastrous luck with cars and there were some hilarious conversations around Ranger's increasing interest in her romantically. Now let's just have a quick chat about Ranger here, if you thought Morelli had things all sewn up in the relationship department Ranger is about to make you question everything, and, as someone who normally hates love triangles with the passion of a burning sun, it's amazing how much I enjoy this one.

It's been a long time since I read this series last but I'm on my 3rd read through of about the first 10 books and 2nd of the following 6 so I'm not a newbie by any means and I honestly STILL can't decide which one of the guys I like best. They both suit Stephanie in different ways and I actually think she'd stand a good chance of making things work with either of them but I do think her history with Joe puts him in a good position to come out on top (please don't spoiler me if you know who she chooses, I honestly can't remember if a decision has been made or not in the books I read in and I'm planning on reading the entire series so I will find out for myself soon enough). Up until this point Stephanie's chemistry with Joe has been the most obvious but they both currently have very different ideas about marriage and what they want from the future. Ranger is a man of mystery but we finally get to learn a little more about his background in this one, including a couple of surprising revelations about his relationship history. We still have a lot of questions about what he does with most of his time and how he can afford to keep Stephanie stocked with a seemingly endless supply of high level cars but it's pretty clear that he works in a few gray areas. I enjoyed seeing him push Stephanie a bit in this book, he knocks her out of her comfort zone and it makes for an interesting dynamic between them.

The romance really isn't the main focus of these stories though and it's Stephanie along with her friends and family that really make this series shine. I absolutely adore Grandma Mazur, she never fails to make me laugh and she gets herself into some hilarious situations this time. I'm actually quite surprised that Stephanie's poor father hasn't moved out yet, he must be close to a nervous breakdown by now! We get fun new side characters introduced in every book but this one sees the return of the creepiest villain of the entire series and he absolutely terrifies me. Stephanie is one gutsy lady to manage to stand her ground when facing him and I don't blame her in the slightest for falling to pieces afterwards. The mystery of Stephanie's missing uncle was well done and took things in a direction I wasn't expecting but that's something this series has always done well. These books are brilliant, light hearted, very, very funny and the perfect way to spend an afternoon, High Five ends on a MAJOR tease so I'm glad I don't have to wait for the next book to be released.