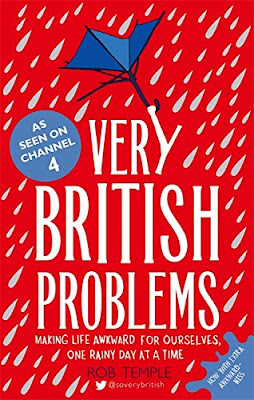 There's an epidemic sweeping the nation.

Symptoms include:
* Acute embarrassment at the mere notion of 'making a fuss'
* Extreme awkwardness when faced with any social greeting beyond a brisk handshake
* An unhealthy preoccupation with meteorology

Doctors have also reported several cases of unnecessary apologising, an obsessive interest in queuing etiquette and raised blood pressure when discussing the correct way to make a hot drink. If you have experienced any of these symptoms, you may be suffering from VERY BRITISH PROBLEMS.

VERY BRITISH PROBLEMS are highly contagious.
There is no known cure.

Rob Temple's tea-spillingly funny book, inspired by the incredibly @soverybritish Twitter phenomenon, reveals all the ways in which we are a nation of socially awkward but well-meaning oddballs, struggling to make it through every day without saying sorry to an inaminate object. Take comfort in the misfortunes of others. You are not alone.

Review:
As a fan of the @soverybritish Twitter account I couldn't resist ordering a copy of Very British Problems and it's now one of my favourite ways to pass the time when I'm having a bad day. You can open this book at pretty much any page and find something that will at least make you giggle, if not completely howl with laughter so it's ideal for dipping in and out of whenever the mood strikes you.

Of course you may pick it up only intending to read a couple of pages but before you know it you'll probably have read the entire book and you'll definitely have a stitch in your side from laughing so hard!

Us Brits are an eccentric lot and this book points out many of our weird little quirky habits, it makes fun of our constant need to apologise and our obsession with queueing, it jokes about our addiction to tea and biscuits and it laughs at our preoccupation with the weather. I don't think a page went by where I wasn't furiously nodding my head at how true it all was and I spent a ridiculous amount of time reading sections to friends and family members or texting quotes to people further afield.

I could probably pick a quote from nearly every page to share with you but here are just a few of my favourites from the section on "Repressing One's Rage" (which starts on pg 130 of the UK paperback):

Attempting to deal with a queue jumper by staring fiercely at the back of their head.

Becoming so furious that you beg someone for their pardon.

Thanking people under your breath as punishment for them not thanking you.

Accidentally saying 'you're welcome' too loudly when someone hasn't thanked you, and smiling politely when they look straight at you.

Occasionally folding your arms and activating a tiny head shake to indicate that the Post Office queue is thoroughly out of order and you'll only put up with it for another two hours. Three, maximum.

Any Brit that tells you they've not done at least three of those is lying and personally I'd have to admit to all five!

Very British Problems is hilarious and well worth buying a copy of, I know I'll be dipping into this book for many years to come and I'm sure visitors to the house will be too. I'll definitely be purchasing a copy of Very British Problems Abroad as soon as the paperback is available so I can laugh at our desperate need to have access to a full English breakfast and how just a glimpse of the sun is enough to turn most of us into a giant lobster!