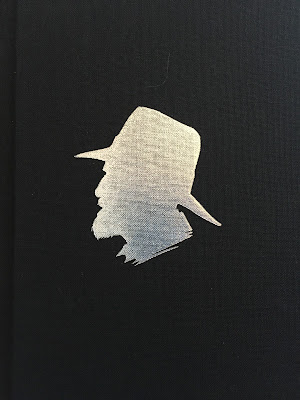 Review:
This book is a limited edition hardback that was given out in the goody bags at the Terry Pratchett Memorial event at the Barbican Theatre in London on the 14th of April 2016. I did wonder if it was even worth writing a review for it since I don't think the book will ever be available to purchase but since I mainly write my reviews so that I can look back at them in years to come I'm just going to do what I always do.

I was lucky enough to be one of the fans who was given tickets to the Terry Pratchett Memorial and the whole evening was a wonderful tribute to Terry, there were some incredibly emotional moments but overall the theme of the evening was definitely laughter. I wrote about the event on my blog (HERE) so you can read all the details there if you're interested and for now I'll just focus on the book.

The team who organised the event obviously put a huge amount of effort into creating this book, aside from the iconic silhouette of Terry in his trademark hat on the front you also have the Roman numerals for his birth and death years (1948 - 2015) on the back along with a bee to represent the Venerable Order of the Honeybee which is an award Terry created to thank the people who most helped him during his writing career. Then on the inside you'll find a large image of the Pratchett family crest along with their motto "Noli Timere Messorem" (which translates rather appropriately to "Don't Fear the Reaper"). 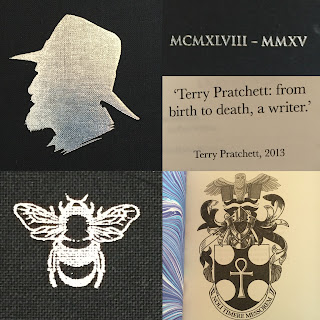 This is a fairly small book and has less than 100 pages but the contents are incredibly personal and very moving. After an introduction from Terry's long term personal assistant Rob Wilkins it includes several pieces of writing by Terry, from The Hades Business, the first story he ever sold (when he was just 13 years old!), to nonfiction pieces about his thought process and his love of hats, a very fitting excerpt from the last Discworld novel The Shepherd's Crown (I'm not going to say what it's about but I think anyone who has read the book will have a pretty good idea) and finally "A Little Advice for Life" from Terry that made me laugh and cry in equal measure.

It also includes a piece about Terry written by Neil Gaiman (that he actually read out at the memorial and I don't think there was a dry eye left in the whole theatre), this was written as the introduction to Terry's non fiction book "A Slip of the Keyboard" but was also posted on the Guardian website so anyone interested can read it in full HERE. If that wasn't enough to bring on the waterworks you'll also find Terry's daughter Rhianna Pratchett's obituary (that she also read to the audience on the night of the memorial) that was again posted online after Terry's death and can be read HERE.

This book is a wonderful keepsake from the event and it's one that I'll always treasure.

I'll leave you with a couple of appropriate Discworld quotes 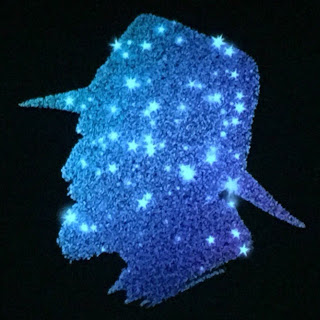