Video: Sarah J. Maas talking about the new characters we'll meet in A Court of Mist and Fury

A Court of Thorns and Roses was one of my favourite books of 2015 so of course I'm incredibly excited about the sequel A Court of Mist and Fury which is releasing next week! I spotted this video of Sarah J Maas giving a few hints about some of the new characters we're going to meet in ACOMAF today so thought I'd share it here for anyone else who loves the series as much as I do.

Here's a bit more information about A Court of Mist and Fury: 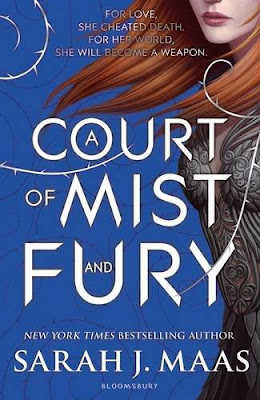 Feyre survived Amarantha's clutches to return to the Spring Court - but at a steep cost. Though she now has the powers of the High Fae, her heart remains human, and it can't forget the terrible deeds she performed to save Tamlin's people.

Nor has Feyre forgotten her bargain with Rhysand, High Lord of the feared Night Court. As Feyre navigates its dark web of politics, passion, and dazzling power, a greater evil looms - and she might be key to stopping it. But only if she can harness her harrowing gifts, heal her fractured soul, and decide how she wishes to shape her future - and the future of a world cleaved in two.

With more than a million copies sold of her beloved Throne of Glass series, Sarah J. Maas's masterful storytelling brings this second book in her seductive and action-packed series to new heights.

ACOTAR Series:
A Court of Thorns and Roses
A Court of Mist and Fury
Future titles to be confirmed


Just in case you haven't read A Court of Thorns and Roses yet (in which case why the hell not? It's AWESOME!) I found this pretty cool, fan made, book trailer which should hopefully convince you to give it a try:

Now I'm off to start my reread of A Court of Thorns and Roses so I'm ready when my copy of A Court of Mist and Fury turns up on Tuesday!
at 22:05