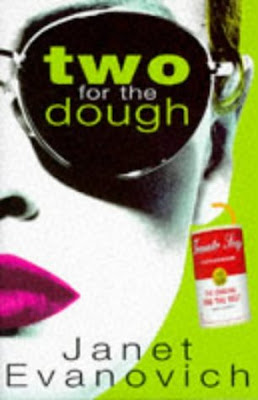 Kenny Mancuso shot his childhood buddy Moogey Bues in the knee and then jumped bail. Now bounty hunter extraordinaire Stephanie Plum is on the case to track Kenny down.

Then someone finishes Moogey off, Kenny can't be found, twenty-four coffins are missing, and there's some ex-army heavy artillery roaming the streets. And Joe Morelli - the cop with more than a professional interest in her every move - is tailing Stephanie.

With a healthy disregard for the law, and an unhealthy dependence on marshmallow hot chocolate, Stephanie's a match for anyone - even Morelli. That is, until her eccentric grandmother goes AWOL and little pieces of corpses start to disappear . . .

Review:
Stephanie's latest skip should be easy to collar, local boy Kenny shot his best friend in the knee during an argument but it was only a minor incident and Moogey didn't even want to press charges so there is no need for him to do a disappearing act. Then, after Kenny misses his court date, Moogey is murdered and prime suspect Kenny falls completely off the radar. Not one to walk away from a case Stephanie becomes determined to track Kenny down but when her investigations lead her to a funeral parlour with a missing batch of caskets and then various body parts start going missing things get much more complicated.

This series is just so much fun to read, it's pure entertainment from first page to last and every book has me giggling the whole way through. I must be on my third read through of the early books in the series yet I never get tired of them. Stephanie is such a likeable character, she has a knack for finding trouble and she gets herself into the most ridiculous and crazy situations but I love her all the more because of it. The best thing about these books are the characters, Stephanie's whole family is brilliant but it's Grandma Mazur who steals the show in this book, she manages to cause even more trouble than Stephanie and that's really saying something. I love the things she comes out with and I could happily quote half the book in this review.

I also love the men in the series, Ranger is still pretty much a complete mystery at this point but I know from later books how brilliant he is and I'm looking forward to unravelling him a bit more. Morelli is fantastic and the chemistry between him and Stephanie is great, they have a very complicated history so she is very wary of trusting him but it's obvious he's more than a little interested and I'm enjoying watching their relationship develop.

I've been wanting to reread these books and catch up with the most recent releases (I think I got to about book 15 in my last read through) for a long time now so I'm glad to be reading the series with a group of friends. At one book a month this is going to be a very long ongoing project but I'm actually enjoying having at least one really funny and light hearted read to look forward to each month and I think having such a relaxed schedule is going to make it much easier to stick to. Roll on January so I can get started on Three to Get Deadly!