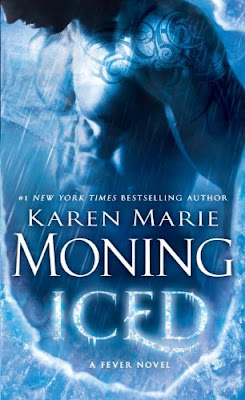 For years, MacKayla Lane has battled against the Dark Fae, but now it's Dani "Mega" O'Malley's turn to fight. Dani has always played by her own set of rules, and now her biggest rule is: Do what it takes to survive. Possessing rare talents and the all-powerful Sword of Light, Dani is one of the few humans who can defend themselves against the Unseelie. But now, people are being mysteriously frozen to death all over the city, encased on the spot in sub-zero, icy tableaux.

When Dublin's most seductive nightclub gets blanketed in hoarfrost, Dani finds herself at the mercy of Ryodan the club's immortal owner. He needs her quick wit to figure out what's freezing Fae and humans dead in their tracks - and Ryodan will do anything to ensure her compliance. Dodging bullets, fangs, and fists, Dani must strike treacherous bargains and make desperate alliances to save her beloved Dublin - before everything and everyone in it gets iced.

Review:
I put off reading Iced for the longest time because of the negative reaction so many of my friends had to the story. In fact, I don't think I'd have EVER got around to reading it if it wasn't for the group read with some of my friends on Goodreads so thanks for the encouragement girls! Anyway, you can probably guess I went into this story with extremely low expectations, I fully expected to hate it and I half expected not to even be able to make it to the end so you can imagine how surprised I was to find myself enjoying the story. A lot. Yes, consider me completely shocked!

I've liked Dani from the beginning, I know she used to get on a lot of people's nerves during the rest of the series but I've always had a soft spot for her. She's just this spunky kid who has grown up under the worst circumstances, she has all these special abilities and has been mercilessly used by Rowena since she was about eight years old. Dani has seen and done things that no child should ever experience and it's given her quite the attitude. She thinks she's older and more sophisticated than she actually is (but didn't we all as teenagers?) and the fact that she has her superspeed and strength has given her quite a large ego but deep down she's just a lonely child looking to be loved and she brings out all of my protective instincts.

I absolutely loved the character progression we seen her go through and in Iced we really get to see just how intelligent she is underneath all that bluster. Dani is clever and when she boldly claims to be the smartest person she knows she isn't just being big headed she's stating a fact. She sees things that nobody else (except for perhaps Dancer) does and she has a way of looking at the world that helps her puzzle things out faster than anyone around her. Like a lot of teens Dani is full of contradictions: she's super smart but also incredibly naive; she's extremely confident but she's also desperately looking for approval; she thinks she knows everything but she completely misses some things that are staring her right in the face; she acts like a grown up one minute and a confused child the next; she acts independant and says she doesn't need anyone but she spends a lot of time looking for love. It's these contradictions that make her feel so much more realistic and they left me desperately wanting to take care of her.


The characters around her I had a lot more trouble with but in spite of the fact that I found myself wanting to punch nearly every other character I still loved this book. Christian has changed completely from the first book and he is probably the character who disturbed me the most, it didn't help that we got to spend some time inside his head and boy is that a creepy place to be. I think KMM did a wonderful job of showing how alien he is becoming and I loved watching that progression in his character. I can completely understand why people who were big fans of his aren't happy though, I was pretty ambivalent towards him before this book so I don't mind that he's now a character I love to hate but if he was someone I'd been crushing on I'd have been devastated.

I'm not too sure how I feel about Ryodan, I think the fact that we don't get to see what he's thinking is something that goes in his favour because I'm sure if I knew what was going on inside his head I'd want to batter him even more than I already do. I hated the way he bullied Dani, he deliberately went out of his way to hurt her and make her uncomfortable and he never once offered her help even when she desperately needed it and pretty much begged him for it. I really disliked the way he constantly played on her emotions to get what he wanted and then turned around and blamed her for the nasty things he did to her. There is no getting around the fact that he used her mercilessly and he didn't give her anything back for it. Barrons was always a mystery, I often questioned his motives and wondered what he had planned but no matter how aggressive he acted or how hard he pushed Mac you always knew he had her back and that he wouldn't let any harm come to her. I wish I could say the same thing about Ryodan and Dani but that just isn't the case and it makes it very hard for me to like his character. I never really got the creepy perv vibes from him that a lot of people did, but I also never pegged him as a protector or someone who would look out for her and that's what Dani desperately needed.

Dancer was by far my favourite character alongside Dani, I loved the friendship that the two of them have and the way he was always there for her even though she is so much stronger than he is. Dancer is the one who has her back and who doesn't patronise her, he treats her like the intelligent young woman that she is and he never pushes her for anything. He is the only one who currently isn't trying to use her for his own means so I really, really hope that he is who he says he is. Unfortunately I have a terrible feeling that he's keeping secrets and I just hope they're not secrets that will break Dani when she finds out about them.

Now we get to the women of the series, I'm going to keep this fairly brief because I've already written far too much but I'm disappointed by the fact that we have lost all of the strong, capable women of the earlier books. Mac was pretty much absent and it broke my heart seeing how much Dani misses her. Dani is convinced that Mac will kill her for the part she played in Alina's murder but I'm really, REALLY hoping that Mac doesn't hold it against her considering she knows that it was completely out of Dani's control and that Rowena is really the one to blame. I'm not sure how likely that is looking considering the ending of this book but I'm keeping my fingers crossed. Kat was someone I always respected before and I thought she'd be much more capable of guiding the sidhe-seers than Rowena but with Cruce messing around inside her head she's failing pretty spectacularly. She does make a big decision towards the end of the book that left me feeling hopeful though so I'm holding off my judgement on her until the next book. The character who disappointed me the most was Jo, she went from smart and capable sidhe-seer, to someone being held hostage as a way for Ryodan to keep Dani under control to basically Ryodan's sex slave. She stopped caring about Dani or any of the others and all she was interested in was sex, Ryodan only had to look at her and she dropped her knickers even knowing that he had no real interest in a long term relationship with her. I really disliked the two of them together, I lost respect for Jo because she let him walk all over her and I hated Ryodan even more for the way he used her just to get at Dani.

I did enjoy the mystery of the iced scenes that they kept discovering though and it was fun to see Dani investigating. She got to show how smart she was (although the fact that Ryodan and the rest of the Nine were completely incapable of solving things without her didn't really reflect well on them!) and I liked seeing how she put all the clues together. I can totally understand why this was such a polarising book, everyone I know seems to either love it or hate it and I can see and relate to the reasoning behind all the different arguments. The fact of the matter is that I was completely gripped from beginning to end, there were things I hated about the book but other things I loved but I think that going in with such low expectations really worked in my favour because I was pleasantly surprised rather that terribly disappointed. I was dreading reading Iced but now I'm excited to read Burned and I'm very curious to see where KMM takes the series from here.