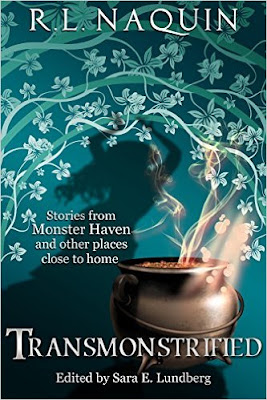 R.L. Naquin, author of the Monster Haven series, shares an assortment of stories from places just outside the world we know. These pages are filled with friendly monsters, dueling witches, floating ice fish, chupacabra taxidermy, and escalators leading to Heaven and Hell.

Also, take a peek into the new world of the Mount Olympus Employment Agency (series coming in 2015) with “Unmatched Cupid” and “Undercover Gorgon.”

Transmonstrified offers quick reads for when the boss leaves the room to get coffee and longer ones for when that chatty lady on the plane won’t be quiet. Eighteen stories filled with magic and oddities await.

Because everybody needs a little magic.

Review:
As a fan of R.L. Naquin's Monster Haven series when I found out that the Transmonstrified short story collection contained 2 never before seen stories set in that world I knew I had to buy it. It actually contains 5 Monster Haven stories (3 of which were published separately so I'd already read them) but I didn't realise how many other stories would be included. In total the collection contains 22 stories and poems 2 set in the world of the author's new Mount Olympus series and 15 that are completely stand alone.

The stand alone stories are about a weird and wonderful collection of different supernatural creatures, you'll read about everything from feuding witches and leprechauns who've had their gold stolen to chupacabras and dream eating monsters. Some of the tales have a darker fairytale feel to them while others are humorous life observations. As with any short story collection there were some stories I enjoyed more than others but overall I'd say the quality was very high and considering I only expected to be reading 2 new to me stories I was thrilled by how much new material the book contains.

I'll give you a little more information on the Monster Haven and Mount Olympus stories below, most of these stories can be read even if you're unfamiliar with the series but I'd definitely recommend reading the full length books if you like these shorts. I'm already a fan of Monster Haven but these prequels have made me excited to get started on the Mount Olympus books too.

This is the true tale of how Riley became a reaper and it also gives a little information about what attracted him to Zoey.

Zoey gets a very unexpected surprise when she's literally left holding the baby. Along with Maurice it's up to her to track down the baby's parents and try to reunite their family.

A cute little story about different Hidden holiday traditions, Zoey is a little overwhelmed at first but soon realises how grateful she is to have all her friends around her.

3.5 - What Zoey Doesn't know (also available as a separate ebook)

This story is told from Maurice's point of view and shows a day in the life of a closet monster, he gets up to some rather surprising things while Zoey is out at work.

A fun story featuring our favourite djinn Kam who is doing a little undercover ghost hunting in a beauty salon.

Mount Olympus Short Stories:
(I believe these are both prequels to the main books)

This is the story of a young girl who has been employed by the Mount Olympus Employment Agency as a Cupid, she's pretty disastrous at making matches though.

The first in a spin off series Becoming is the tale of Patrice who discovers on her 20th birthday that's she's a gorgon. With her new snake hairdo she's not able to continue her normal human life so she goes to work at the Mount Olympus Employment Agency.

Overall I really enjoyed this anthology and would definitely recommend it for anyone who likes funny short stories with crazy characters and interesting supernatural creatures. Even if you're like me and have already purchased some of the stories separately there is enough new material in here to make it worth buying again and it's nice to have all of the Monster Haven shorts in one place.