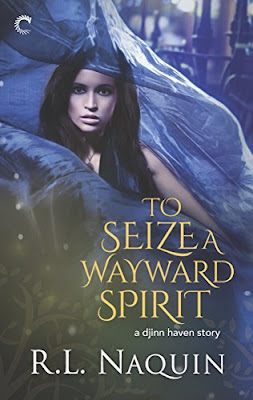 After a major goof turned their last mission into chaos, Hidden Government chaser Kam and her friends must hunt and recapture a crapton of souls. Seventeen, to be precise. But by the time they chase down the first one—a goblin en route back home to Oklahoma—a banshee ups and gets assassinated, leaving their progress at exactly negative one.

The connection between Kam’s goblin and her banshee? A cosplay club, natch. Because sometimes monsters like to pretend to be humans dressing up as monsters.

As the body count rises and the Hidden cosplayers point fingers at each other, it’s up to Kam and her team to stop the insanity. One costumed faction has a secret they’re not sharing—even with each other—and if the bad seed isn’t found soon, the others are likely to be murdered…or worse.

This book is approximately 65,000 words

Review:
To Seize a Wayward Spirit picks up where the last book left off with Kam, Ash and Tahm on a mission to hunt down the souls that they accidentally freed from Pete's Soul Stone. Kam is the most experienced Reaper amongst them and it's her job to train the others so they can get the job done as quickly as possible. Of course nothing ever goes quite to plan and they are derailed from their task when the stumble across a murdered banshee whose spirit leads them into investigating a spate of mysterious Hidden deaths. It all seems to link back to a Hidden cosplay group but why are all the members slowly being killed off?

One of the things I love most about books set in this world is the amount of humour that R.L. Naquin packs into these stories. Nothing is ever quite what it seems and Kam is always thrown in at the deep end while she tries to figure out exactly what is happening. I'll admit I was hoping we might see a bit of Zoey and the other characters from the original series but I'm enjoying getting to know Kam and seeing the camaraderie building between her and Ash. Things are much more complicated between her and Tahm considering they're technically engaged even though they've been apart for the last 100 years, Kam isn't too sure what she wants to do about that but it seems like Tahm is determined to win her around. I'm enjoying the banter between them along with the hints that they're both attracted to each other so I'm looking forward to seeing their relationship develop as the series continues.

The whole cosplay element added a fun dimension to this story and allowed loads of fun characters to be introduced. I'm not sure how many (if any) we'll see of them in the next book but they all had a fun part to play in this story. If you want an urban fantasy series that's really light hearted, full of humour and just plain fun to read then you can't go wrong with the Djinn Haven series or the original Monster Haven books. I've been reading these books since 2014 and there's a reason I keep coming back for more!