Today I have a fantastic guest post to share with you from Sarah Maria Griffin to celebrate the release of her fantastic debut novel Spare and Found Parts. Before I share Sarah's guest post let me give you a little more information about the book! 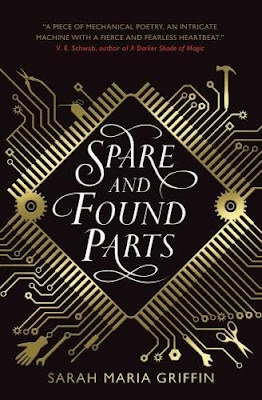 We are all more than the sum of our parts.

In a city devastated by an epidemic, where survivors are all missing parts - an arm, a leg, an eye - Nell has always been an outsider. Her father is the famed scientist who created the biomechanics limbs that everyone now uses. But she's the only one with her machinery on the inside: her heart. Since the childhood operation, she has ticked. Like a clock, like a bomb. And as her community rebuilds, everyone is expected to contribute to the society's good . . . but how can Nell live up to her father's revolutionary ideas when she has none of her own?

Then she finds a lost mannequin's hand while salvaging on the beach, and inspiration strikes. Can Nell build her own companion in a world that fears advanced technology? The deeper she sinks into this plan, the more she learns about her city - and her father, who is hiding secret experiments of his own.

Some remarks and notes on the parts inside of Spare and Found Parts: why Nell is how she is, a look at some of the allegory of the work.

Spare and Found Parts, had and always had, even from conception, a deep concern with feminism and the body. Nell, the protagonist, has a chest cavity full of wires and metal and steel - think HR Giger - and a scar that runs from her lip to her navel - and, because of this wiring and machinery, she ticks. Audibly. The world she lives in is full of folks whose bodies have electrical components, or absent limbs, inherited from the Turn that eliminated the vast majority of the population. The cost of a generation's survival was a 'missing part', so to speak. However, Nell is the only person in her city with missing internal parts - which alienates her from those around her. She's suspicious looking to them - almost-whole, but also, not. And the ticking, which is reflective of her mood - it increases in tempo and pace and is a constant audio companion to her - is an even further deterrent. In a world of others, Nell is an even otherer-other.

Nell copes poorly with being othered - and is, in many regards, a fairly extremely unlikable protagonist. She is selfish, deceitful, a thief, ambitious beyond belief - and occasionally slightly dangerous. However, if you superimposed all of these traits onto say, a male hero, it would make him complicated, brooding, maybe even romantic. We somehow expect a selflessness from even our most 'unlikable' protagonist, a martyrdom. Nell is a martyr to nothing, she has a goal in mind and even though she discovers some true horror along the way, she is brave and unapologetic - I wanted to allow her to be an antihero, a luxury that female characters are seldom let away with. Her mother, Cora, was the very same. A woman so ambitious that she destroyed herself in the pursuit of knowledge - somewhere, the ghost of Marie Curie lingers in Cora's dedication and curiosity. It is really important for me as a writer to do my best to show women's complex, rich internal lives - to show them defying expectation, occasionally failing but conquering, too. Nell's invention and building of Io, for example, could easily have become a motherhood metaphor. I really wanted to subvert the notion that every time a woman makes something she is in some capacity tied to this strict notion of motherhood - I occasionally joke about this book being my creepy paper daughter, but in writing I am more an inventor than a mother. I wanted the same thing for Nell - to be able to create a strange life, a new thing, without it ever calling her mother. When a man creates life, he is trying to be god - as we see in Frankenstein - and I wanted that same hubris, that same arrogance for Nell. Surely female characters deserve the complexity of these flaws - deserve to have equal opportunities to do terrible things, as well as to do great things - and to do all the other grey things in between. These are things that set a ot of momentum in the writing of this book - I wanted it turn notions of the mad scientist upside down, to push exactly what it is we expect of the women we read about, what kind of adventures they have and what those adventures turn them into.

Thanks for such a fantastic and insightful guest post Sarah. I love the way you made Nell an anti-hero, you're totally right that we see this regularly for male characters but hardly ever when it comes to female ones! 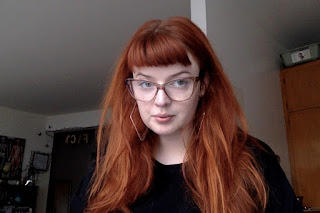 Sarah Maria Griffin lives in Dublin, Ireland, in a small red brick house by the sea, with her husband and cat. She writes about monsters, growing up, and everything those two things have in common. Her first book, SPARE AND FOUND PARTS, is out now.

Don't forget to check out the rest of the stops on the Spare and Found Parts blog tour: 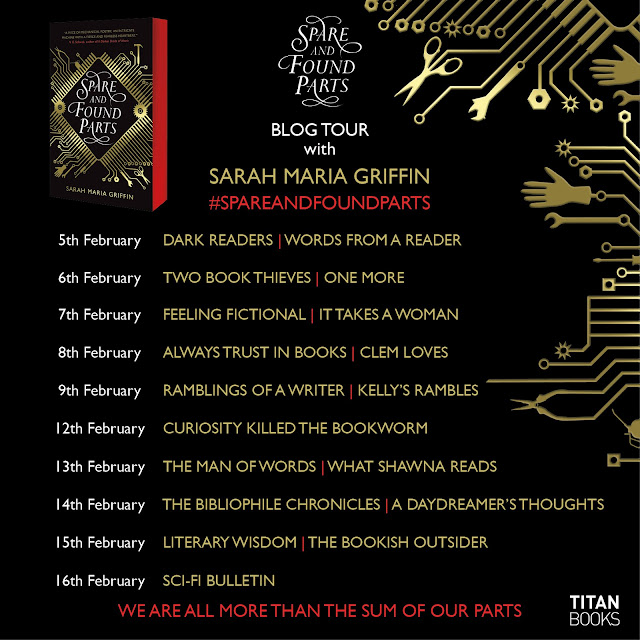