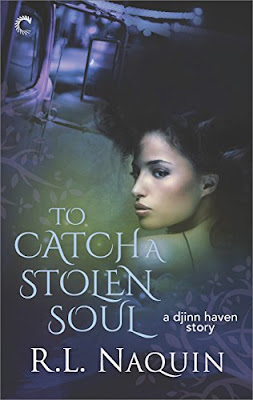 Fans of the Monster Haven series by R.L. Naquin will love this beguiling spin-off, featuring a trapped djinn caught in a hot mess of lost souls, fast food and otherwordly murder.

Kam is a soul chaser for the Hidden Government, a much harder job now that the Hidden look like everyone else. Broke, out of magic and sick of playing waitress in a pirate-themed dive bar, Kam jumps at a chance for an out-of-town mission.

A reaper—and his loaded soul stone—have gone missing. The stone contains souls that might get permanently stuck if Kam doesn't find it, like, yesterday. She tracks the reaper down to a food truck outside Kansas City, only to find a dead reaper and no soul stone in sight. Which means that someone who should be dead killed the reaper and is running around with a powerful magic item. Not good.

And apparently the killer is targeting food-truck owners that also happen to be Hidden. So the only thing to do is open her own truck and go undercover—goodbye Kam the Djinn, hello Mobile Food Entrepreneur—and hope that she and her new runaway friend won't be the next targets...

Review:
I love R.L. Naquin's Monster Haven series and was really sad when it ended so you can imagine how excited I was when I found out she was writing a spin off series about my favourite djinn Kam. You don't have to have read the previous series to enjoy this one but I definitely think you'll enjoy it more if you're already a fan, Kam was a big character in the other series and we also get glimpses of a few other familiar faces that just made this even more fun to read.

If you're completely new to this world then all you really need to know is that Kam is a djinn who has been living on earth for 100 years, unfortunately for her she spent most of that time trapped in a box by her last master but now she finally has her freedom and is determined to make the most of it before she has to return to the djinn realm to be with her family. If you're familiar with the series you'll probably remember that Kam left Zoey and her other friends to go out on her own in the world and explore a little. To make a little cash along the way she works for the Hidden Government as a soul chaser, basically someone who tracks down rogue souls and helps them move on to the afterlife.

Kam's latest job involves tracking down a missing Reaper, and the full soul stone he had in his possession, before the souls are trapped inside forever. What starts as a hunt for a missing person quickly turns into a murder investigation and Kam is forced to go undercover amongst a community of Hidden food truck owners while she tries to figure out who is targeting them.

It was so much fun being back in this world again. I did miss Zoey and all the other familiar faces but I enjoyed spending time with Kam and I think it was better that she was out on her own so she could establish herself as the main character for the series. We do get to hear about what the others are up to which was nice but the focus was definitely on Kam and the new friends she makes, particularly a teenage runaway called Ash. Kam and Ash make a great team, although they've not known each other for long they act like sisters and I think having someone to take care of brought out the best in Kam.

My one complaint was that the murder mystery was a little too easy to solve, there wasn't exactly a large suspect pool so it was fairly obvious from very early on who the culprit was and I would have enjoyed it a bit more if the author had managed to surprise me. In spite of that this was a really fun read though, I loved getting to know the new characters and the way things ended definitely left me wanting to spend more time with Kam and her new work partners. I have very high hopes for this series and can't wait to carry on reading it.