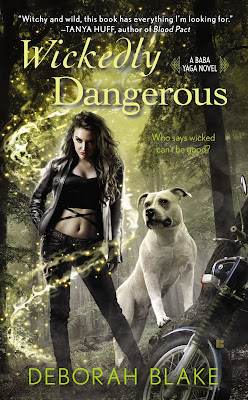 Known as the wicked witch of Russian fairy tales, Baba Yaga is not one woman, but rather a title carried by a chosen few. They keep the balance of nature and guard the borders of our world, but don’t make the mistake of crossing one of them . . .

Older than she looks and powerful beyond measure, Barbara Yager no longer has much in common with the mortal life she left behind long ago. Posing as an herbalist and researcher, she travels the country with her faithful (mostly) dragon-turned-dog in an enchanted Airstream, fulfilling her duties as a Baba Yaga and avoiding any possibility of human attachment.

But when she is summoned to find a missing child, Barbara suddenly finds herself caught up in a web of deceit and an unexpected attraction to the charming but frustrating Sheriff Liam McClellan.

Now, as Barbara fights both human enemies and Otherworld creatures to save the lives of three innocent children, she discovers that her most difficult battle may be with her own heart . . .

Review:
You may think you know the legend of Baba Yaga from Russian fairytales but all of the legends are true. In fact, Barbara Yager is one of three Baba Yaga witches in the United States, and along with her sisters, it is her job to keep nature in balance and to guard the portals between earth and the Otherworld. When Barbara's gift pulls her to a small town with several missing children it should be a fairly easy case but it quickly becomes clear that something sinister is going on. There is obviously a being from the Otherworld causing mischief and the magic they are using is having a major impact on both worlds. It is up to Barbara to figure out what is going on and find a way to fix it, hopefully before any more children are taken and before the entire town is turned against her by her powerful new enemies.

So the concept of this series is great and there were a lot of things I liked about Wickedly Dangerous and the prequel novella Wickedly Magical but unfortunately I didn't end up loving this quite as much as I'd hoped. I really like the way the Baba Yaga's are portrayed, Barbara's magical airstream was great and I loved her companion Chudo-Yudo, a dragon who disguises himself as a rather large dog when they have human company. I also really liked the addition of the three immortal riders that all of the Baba's are able to call upon for assistance. I had high hopes for the mystery in the beginning but we ended up discovering the villain of the piece far too early and they were always one step ahead of Barbara which made her look rather incompetent. We're constantly being told how powerful and wise Barbara is but she failed time and time again and nearly ended up getting lynched by a mob of angry townspeople for her efforts.

It's probably partly my fault for going into this series expecting urban fantasy and discovering it was actually paranormal romance. I actually love both genres so that wouldn't usually be an issue for me but I was expecting the mystery and magic to be the main focus and ended up being disappointed that a concept that was so brilliant was watered down for such a mediocre romance. Love interest Sherif Liam McClellan just wasn't anything special and I found the romance between him and Barbara completely unbelievable. I probably could have been sold on them as a couple if it had been drawn out more but they were making puppy eyes at each other pretty much from the moment they met and I never really felt there was anything between them apart from physical attraction.

The story was also fairly heavy handed in its environmental message, I don't mind books that have a bigger message but sometimes you can ram something down my throat so hard that it just leaves a bad taste in my mouth and that was definitely the case here. As much as there were things that bothered me about this book I do still really like the concept behind this series and since the next two books will have Barbara's sisters as the main characters I'm hoping that I'll end up enjoying their stories more. There is so much to like about this world and I really hope that the remaining books focus more on that alongside creating believable romances for the other Baba Yagas.