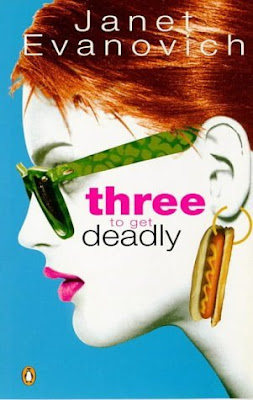 Nobody can believe Mo would do anything wrong. But Stephanie - with the help of big blonde Lula, good cop/bad cop Joe Morelli and fitness-freak Ranger - soon discovers that Mo has more than candy in his basement. Uncovering the truth about Mo is one thing, but coping with dead drug dealers, a man-sized chicken and a seriously bright hair colour is pushing Stephanie to the edge. And when someone holds her hamster to ransom, things look like they're getting deadly.

Review:
Mo is a much loved character around the Burg, he's the owner of the local sweet shop and adored by all, from the youngest children right through to the little old ladies who frequent his shop. Unfortunately Mo has skipped his bail and it's Stephanie's job to bring him in, something that might be a little bit easier if his fan club wasn't causing her problems at every turn. Nobody can believe that Mo could possibly have done anything wrong so of course Stephanie comes across as the mean woman with nothing better to do than cart an innocent man off to jail which doesn't exactly make her very popular with the locals. When dead bodies start turning up and Stephanie finds herself being threatened by masked gun men warning her to stop looking for Mo she knows she's out of her league so she calls in the help of bounty hunter extraordinaire Ranger.

This series is just so much fun to read, Stephanie is such a trouble magnet and she always manages to stumble into such crazy situations that you just have to laugh at her antics. In Three to Get Deadly we see her crazy sidekick Lula play a bigger part, we also get to find out a bit more about Ranger (personally I like Lula's theory that he's a secret superhero in his spare time!) and of course we see more of our favourite local cop Morelli. I'm not going to say much about the plot but expect plenty of wacky antics, weird and wonderful characters and unexpected twists. Janet Evanovich never fails to make me snort with laughter and this series always leaves me grinning from ear to ear - even on a reread.