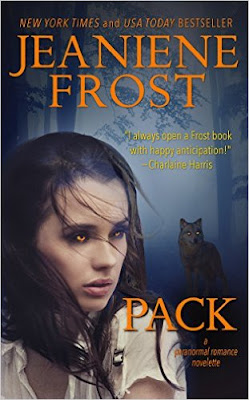 Lost in the woods . . .
Marlee Peters is tired of putting her dreams on hold, so when her friends can’t continue on a long- anticipated hike of Yellowstone National Park, she goes on without them. But Marlee isn’t alone in the woods; she’s being hunted by a pack of frighteningly intelligent wolves. When a fight for survival takes an impossible turn, Marlee realizes that the enigmatic stranger who saves her might either be her dream come true . . . or her waking nightmare.

Big, bad wolf . . .
As the pack’s enforcer, Daniel is sworn to keep the existence of werewolves a secret. He knows that Marlee’s bites may change her life in a way she can’t imagine, but if they don’t, he can’t let her tell others about his race. Yet Marlee is awakening Daniel’s most primal urges, and soon, neither one of them will be able to resist the call of the wild . . .

Review:
Pack is a short story that was originally published in the Mammoth Book of Paranormal Romance (back in 2009) and has apparently been updated and added to before it was re-released as a stand alone ebook. I can't confirm how much has changed because I never read the original but I have to admit that this isn't Jeaniene Frost's best work.

It's not a terrible story but it's only around 50 pages long so there isn't much time for character development, especially considering this isn't set in a world we're familiar with and is actually the author's first attempt at writing about werewolves. I didn't dislike the story but I can't say it was particularly memorable, there is definitely potential here and if the author said she was going to write more books in this world then I'd happily buy them but I think we needed a longer story to give us time to connect with the characters.

I'm not sure whether to recommend this or not, if you just want something quick to read then it isn't a bad way to spend 20 minutes but if you're looking for something with a bit more depth then there are plenty of other options available.