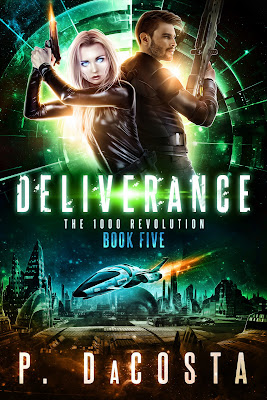 Bren's missing with a bounty on his head, which isn't Caleb's problem, until Turner Candelario makes it Caleb's problem. But why does a pirate with an ax to grind suddenly want to work with the down-and-out captain who killed his sister?

The mission stinks worse than the iron mines, but what else is there to do in the Nine systems now Caleb's trying to fly-right? Besides, Bren's bounty looks mighty tempting.

One should be dead, but death didn't stop her before. Chitec is gone, the Nine systems left in disarray, and in the chaos, One moves among them like a ghost, seeing what others cannot: a new malevolent force rises. A force One has encountered before. And caught in the middle of it all? Brendan Shepperd.

Chitec was just the beginning. The true 1000 Revolution begins now...

Review:
I absolutely love Pippa DaCosta's 1000 Revolution series so I was thrilled when she announced she was writing a whole new series of books about these characters. Think of Deliverance as the first book in season two of the 1000 Revolution, it's the beginning of a whole new overarching plot but because it draws heavily on events that have gone before it's not really the best place to start if you're new to this world so I'd strongly recommend starting with the first book, Betrayal.

Anyway, this story picks up a few months on from the end of Trust. Caleb believes that One is dead and blames himself, he's been staying on planet running a bar but when Fran and the pirate Turner Candelario steal his ship to go hunting for his brother Caleb is forced to shake himself off and get back into the game. Brendan has been missing for weeks and there's a huge bounty on his head but just what did he do to deserve that? Meanwhile One has found herself a new body but she's also uncovered some very dark and dangerous secrets that she's uniquely qualified to deal with. There are reasons that she's not contacted Caleb to tell him she survived but it won't be too long before their paths cross as they're both thrown right back into another deadly fight for survival.

It was so much fun being back in this world. I'm glad I chose to reread the previous books first because I'd forgotten so much in the three years since the last release. These characters all have such complex histories and all love hoarding secrets so every time you think you have something worked out a new twist comes along and changes everything. Deliverance was just as action packed as I hoped it would be, there is danger around every corner and you never know what will happen next. I'm so glad we've got another 3 books to look forward to and I can't wait to spend more time in this world.