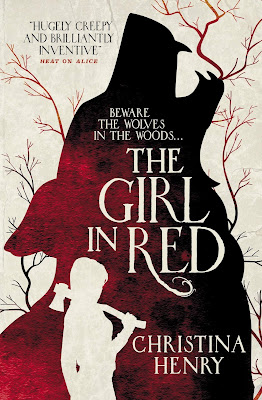 It's not safe for anyone alone in the woods. But the woman in the red jacket has no choice. Not since the Crisis came, decimated the population, and sent those who survived fleeing into quarantine camps that serve as breeding grounds for death, destruction, and disease. She is just a woman trying not to get killed in a world that was perfectly sane and normal until three months ago.

There are worse threats in the woods than the things that stalk their prey at night. Men with dark desires, weak wills, and evil intents. Men in uniform with classified information, deadly secrets, and unforgiving orders. And sometimes, just sometimes, there's something worse than all of the horrible people and vicious beasts combined.

Red doesn't like to think of herself as a killer, but she isn't about to let herself get eaten up just because she is a woman alone in the woods…

Review:
I love retellings and Christina Henry's take on Little Red Riding Hood was something really fun and unexpected. The bones of the original story is there, a young girl dressed in red making her way through a dark wood trying to reach her grandmother's house and facing danger along the way, but apart from that it's totally it's own story. It's set in a post apocalyptic world and we follow two different timelines throughout: After, where Red is alone and trying to make a difficult journey from her home to her Grandmother's house while avoiding military curfews and roaming bands of mercenaries, and Before, where we go back in time and slowly unravel what caused the apocalypse and how that affected Red and her family.

Both timelines were intense and fraught with danger and it kept me compulsively reading because I just HAD to know what would happen next. Red spent her entire life preparing for the apocalypse, her family used to make fun of her obsession with horror books and movies but it meant she was the most prepared to deal with the Crisis that hit the world and wiped out the majority of the population. She was the one with a plan and their best chance of survival in the dangerous new world they now find themselves in. I loved Red, yes she could be a bit of a know it all but she had the brains to back up her boasting and most importantly she was willing to fight to keep herself and others safe. There were times when she could have picked the easy road by herself but chose the harder option and put herself in harm's way to help others and that's always something admirable.

I would have liked a little more information about what caused the virus that ended the world as we know it but at the same time I think some stories can get bogged down in the details rather than focusing on the character's journey and I appreciate that it didn't happen here. Instead we focus on everything that happens to Red and how she reacts to it, the way her instincts kick in and just how hard she has to push herself to survive. The way people acted throughout the book was scarily believable, from the rare survivors who were willing to share their meagre supplies to the groups who practically turned into animals who only cared about themselves and saw anyone else as the enemy. This story is definitely a dark one and we see far more of the latter group than we do the former but there was just enough hope thrown in to keep it from getting too dark and depressing.

This story was everything I didn't know I wanted from a Little Red Riding Hood retelling and I can't wait to start reading through Christina Henry's backlog.