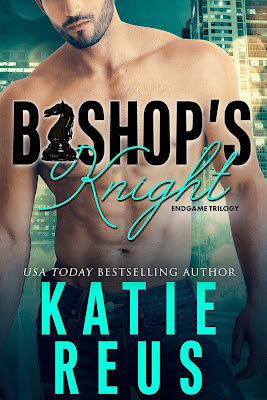 The Bishop siblings’ family is on the verge of collapse as all three find themselves embroiled in danger. Family bonds may keep them alive…but only love can give them something to live for. Read BISHOP’S KNIGHT, the first novel in this ALL NEW heart-pounding Endgame trilogy!

She needs his help…

Thanks to years of government training, Evie Bishop knows how to get into places she doesn’t belong—and she’s very good at it. But years of doing black ops work burned her out so she returns home—to unexpected chaos. One of her brothers is in a coma and the other is in hiding, wanted for murder. Then a fellow operative from her past shows up shot and bleeding with news that an assassin is gunning for everyone involved with a past op. She’s forced to turn to the one man she knows she can trust—the man whose heart she broke.

But it will come with a price…

When Dylan Blackwood proposed a year ago, Evie turned him down flat and walked out of his life. He’s stunned when he finds her on his doorstep covered in someone else’s blood, needing his help. He always knew there was more to her than met the eye—that Evie was never simply the pampered society princess she wanted people to believe she was. But he never expected this. If she needs help, he’ll give it. Even if he can’t forget her betrayal. Even if he isn’t sure he can trust her. But his protection will come with a price—her heart. Before they can have a chance at a future, they’ll have to work together to take down a faceless enemy who has Evie firmly in his crosshairs.

Review:
Ex CIA Agent Evie Bishop has a lot on her plate, one of her brothers is in a coma after being caught in an explosion while the other has been accused of murder and is currently on the run from the police. The last thing she needs is any extra stress but when an old colleague turns up on her doorstep with a gunshot wound and tells her that members of an op they both worked on are being picked off one by one Evie has no choice but to dive back into a world she'd hoped to leave behind her. There is only one person with the resources she needs that Evie can trust to have her back but considering she broke Dylan's heart by walking out on him things are about to get even more complicated.

Bishop's Knight was a great start to the Endgame Trilogy, Evie is facing danger from all angles and the only person she can turn to is her ex Dylan. It's complicated further by the fact that she's still head over heels in love with Dylan but she's been keeping a huge secret from him, not only the fact that she was an agent for the CIA but also the fact that the reason they met was because she specifically targeted him on an op. She was never supposed to get too close to Dylan, he was only meant to be her introduction to the real target, but they had an instant connection that she found impossible to ignore and it ended up becoming serious. She only walked away because she felt that Dylan didn't know the real her and that he'd never forgive her for the secrets she'd been keeping but now they're thrown back together all her feelings come flooding back.

Dylan always thought there was more to Evie than met the eye but it isn't until she comes back into his life that he realises just how much she was hiding from him. He's more than a little intrigued by the strong and capable woman he sees before him and he's determined to get their relationship back on track. First they have to figure out who is targeting Evie and her team though, someone wants her dead and unless they find out who, and put a stop to them, Evie might not have a future at all.

I already said this was a great start to the series, just enough danger and action but still with a good hint of romance and great characters. Evie and Dylan worked really well together, it helps that he's ex military himself so he's more than capable of working alongside Evie to figure out what is really going on. I also really liked what we've seen of Evie's brothers and I'm looking forward to reading their books when they publish.