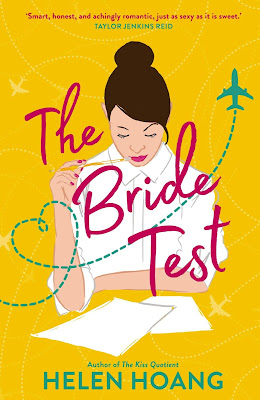 From the critically acclaimed author of The Kiss Quotient comes a romantic novel about love that crosses international borders and all boundaries of the heart...

Khai Diep has no feelings. Well, he feels irritation when people move his things or contentment when ledgers balance down to the penny, but not big, important emotions — like grief. And love. He thinks he's defective. His family knows better— that his autism means he just processes emotions differently. When he steadfastly avoids relationships, his mother takes matters into her own hands and returns to Vietnam to find him the perfect bride.

As a mixed-race girl living in the slums of Ho Chi Minh City, Esme Tran has always felt out of place. When the opportunity arises to come to America and meet a potential husband, she can't turn it down, thinking this could be the break her family needs. Seducing Khai, however, doesn't go as planned. Esme's lessons in love seem to be working... but only on herself. She's hopelessly smitten with a man who's convinced he can never return her affection.

With Esme's time in the United States dwindling, Khai is forced to understand he's been wrong all along. And there's more than one way to love.

Review:
I seem to have a new favourite author when it comes to contemporary romance because I just can't get enough of Helen Hoang's writing. I was a little worried that The Bride Test wouldn't live up to my extremely high expectations because I adored The Kiss Quotient but I shouldn't have been because it was just as fun to read and I fell head over heels for Khai right alongside Esme.

We had already met Khai in the first book as he's Michael's cousin but don't worry if you're jumping into the series here because they're more companion novels than a direct series (I would HIGHLY recommend both books though so you're missing out if you've not read either of them!). Khai is autistic so he doesn't always react in the same way other people do, he didn't even cry when his best friend died and because of that he thinks he is incapable of love or any other strong emotion. His family know better though, they see that he is still grieving for his friend even if he doesn't show it in the same way other people do and his family want to see him happy. His mother in particular has decided that it's time for Khai to get married and start a family so she decided to travel to Vietnam and find him a bride.

This is where we meet Esme, she's a single mother who works hard every day to support her young daughter. She desperately wants to build a better life for her family but it's hard when you're living in the slums of Ho Chi Min City. When Khai's mother offers her the opportunity to travel to America for the summer and meet a potential husband it's an offer Esme can't refuse, especially when it might give her a chance to find her own American father too. Arriving in a country where everything is different and she barely speaks the language makes things really difficult for Esme but she is determined to make the best of things. As she sets about trying to seduce Khai it doesn't take long before she starts to fall in love herself but it looks as if she's the only one developing feelings and perhaps this adventure in America is going to end in disaster after all.

I can't even tell you how much I loved both of these characters, Khai thinks he doesn't know how to love but he's actually a really attentive and caring boyfriend, even when he's only doing it to keep his mother off his back. He's the type of guy who gives things his all so when he commits to a relationship he's all in. He makes a lot of mistakes along the way because he doesn't understand how Esme thinks but this leads to some hilarious misunderstandings and some brilliant conversations with his brother Quan and cousin Michael as they try to help him figure out sex and women. Esme works so hard to build a better life for herself, she gives her all to both her new job and her relationship but at the same time she also goes to college and takes classes to better herself. She wants to prove that she's worthy of Khai but along the way she starts to realise that she doesn't need a man to give her daughter a good life, she's actually strong and capable enough of doing it on her own and I really respected her for that.

On paper it doesn't look like these two fit but in reality they mesh really well. Esme doesn't understand Khai at first but she's willing to make allowances for him when she starts to realise how his autism affects him and they're both able to talk about things like adults when there is something bothering them. Khai is initially horrified at having his routine disrupted when Esme moves in but he quickly adapts as they start figuring out new routines together. I thought they made an adorable couple and I loved how innocent and awkward some of their interactions were, don't get me wrong they had great chemistry but it took time for them to figure out that side of things and get on the same page emotionally too. Quan has been a stand out side character since the beginning of the series so I'm ridiculously excited that he's going to be the hero of the next book and I definitely can't wait to get my hands on a copy.