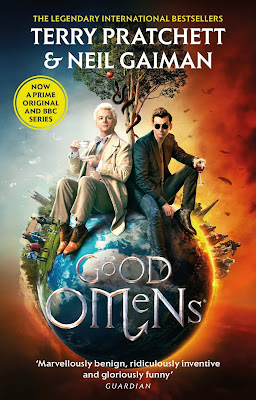 'Armageddon only happens once, you know. They don't let you go around again until you get it right'

According to The Nice and Accurate Prophecies of Agnes Nutter, Witch, Judgement Day is almost upon us and the world's going to end in a week . . .

Now people have been predicting the end of the world almost from its very beginning, so it's only natural to be sceptical when a new date is set for Judgement Day. But what if, for once, the predictions are right, and the apocalypse really is due to arrive next Saturday, just after tea?

You could spend the time left drowning your sorrows, giving away all your possessions in preparation for the rapture, or laughing it off as (hopefully) just another hoax. Or you could just try to do something about it.

It's a predicament that Aziraphale, a somewhat fussy angel, and Crowley, a fast-living demon now finds themselves in. They've been living amongst Earth's mortals since The Beginning and, truth be told, have grown rather fond of the lifestyle and, in all honesty, are not actually looking forward to the coming Apocalypse.

And then there's the small matter that someone appears to have misplaced the Antichrist . . .

Review:
With less than a week to go before armageddon hits, this is the story of an unlikely pairing between the angel Aziraphale and the demon Crowley, who have both decided that they quite like living on Earth and that perhaps, there might be a way to prevent it from being totally destroyed. They've spent the last eleven years guiding the antichrist so he won't be evil enough to bring about the apocalypse but unfortunately with only days to go until the big day they realise they've been monitoring the wrong child. But where is the real antichrist and just what kind of trouble is he about to bring down upon us all?

I've been a huge fan of Terry Pratchett's since I was a teenager but this was my first introduction to Neil Gaiman and I think their writing styles meshed perfectly together to create this story. I've actually lost count of the number of times I've read Good Omens over the years and each time I appreciate the clever humour and insights into human behaviour even more. Unless you've been living under a rock you must be aware of the recent TV adaptation of the story with the screenplay written by Neil Gaiman fulfilling a wish that Terry Pratchett had made before he died. With the all star cast and fabulous trailer I've been dying to watch the show but I wanted to reread the book first so I could fully appreciate the adaptation.

It's hard to review a book that you've read multiple times, and to be honest there are already so many reviews floating around for Good Omens that I hardly need to bother adding my own, but there are always going to be people out there that haven't discovered the story yet and I want to encourage them to give it a try. There is so much fun to be had reading this book, you have an angel who perhaps isn't quite as good as he could be, a demon who is actually a pretty nice guy but don't you dare tell anyone his secret, a witch whose ability to see the future set a whole lot of trouble in motion for future generations of her family, witchfinders, satanic nuns, a gang of unruly eleven year olds and let's not forget the four horsemen of the apocalypse.

It has all the humour you'd expect from these authors as well as their clever observations about the world around us. There are a lot of reasons it holds up so well on multiple rereads and a few of my favourite quotes will probably do more than anything I can say to convince you:

Anyway, if you stop tellin' people it's all sorted out afer they're dead, they might try sorting it all out while they're alive.

People couldn't become truly holy, he said, unless they also had the opportunity to be definitively wicked.

I'm so excited to start watching the TV series now, everything I've seen and heard about the show makes me think I'm going to love it! 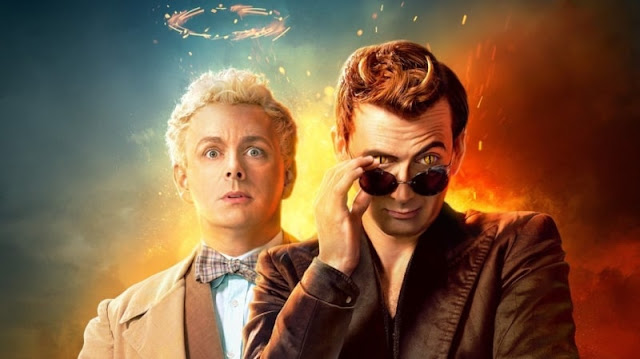 Aziraphale & Crowley as played by Michael Sheen and David Tennant