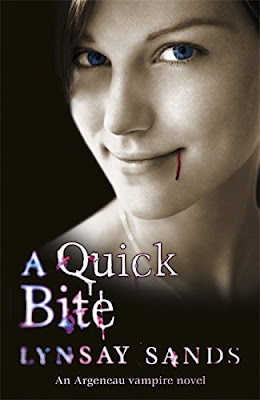 Lissianna spent centuries pining for Mr. Right, not just a quick snack, and the sexy guy she finds in her bed looks like he might be a candidate. But there's another, more pressing issue: her tendency to faint at the sight of blood . . . an especially annoying quirk for a vampire. Her mother thinks she has the perfect solution, and serves up a therapist on a silver platter (or at least a wrought iron bed). And it doesn't hurt that he has a delicious looking neck.

What kind of cold-blooded vampire woman could resist a bite of that? Dr. Gregory Hewitt recovers from the shock of waking up in a stranger's bedroom pretty quickly - once he sees a gorgeous woman about to treat him to a wild night of passion. But is it possible for the good doctor to find true love with a haemophobic vampire vixen, or will he be just another good meal?

It's a question Dr. Greg might be willing to sink his teeth into . . . if he can just get Lissianna to bite.

Argeneau Vampires Series:
A Quick Bite
Love Bites
Single White Vampire
Tall, Dark & Hungry
A Bite to Remember
Bite Me if You Can
The Accidental Vampire
Vampires are Forever
Vampire, Interrupted
The Rogue Hunter
The Immortal Hunter
The Renegade Hunter
Born to Bite
Hungry for You
The Reluctant Vampire
Under a Vampire Moon
The Lady is a Vamp
Immortal Ever After
One Lucky Vampire
Vampire Most Wanted
The Immortal Who Loved Me
About a Vampire
Runaway Vampire
Immortal Nights
Immortal Unchained (2017)

Review:
Lissianna has an unusual problem for a vampire - she faints at the sight of blood! As you can imagine that makes life extremely difficult for her and her family are all worried about how hard it is for her to feed. Her mother decides to take matters into her own hands and she kidnaps a psychologist who specialises in phobias so that he can help Lissianna get over her fears. Things start to go wrong when Lissianna wrongly assumes that Greg is her dinner rather than her doctor but surely one quick bite isn't going to do any harm?

I've been wanting to try the Argeneau series for such a long time now so when I was offered a review copy of A Quick Bite I was really excited and couldn't wait to get started. I'm a huge paranormal romance fan, it's one of my go to genres and I'll never get tired of reading about vampires and other creatures that go bump in the night. I picked this up expecting a fairly light and funny read along the lines of Katie MacAlister's Dark Ones series and I have to say for the first couple of chapters I thought that was exactly what I had got but unfortunately the humour got old very fast and I ended up hating most of the characters.

Lissianna is a 200 year old vampire but along with her cousins (some of whom are even older than she is!) she acts like a 12 year old tween most of the time. They were all just so incredibly childish that it was hard to take any of them seriously and I ended up getting really annoyed with all of them. The way they all kept spying on Lissianna and Greg was just creepy and so was the way everyone could read his mind and know that he was constantly thinking how hot she was. I just got very tired of all the erection jokes! On the subject of Greg I thought is reactions to the situation he found himself in were completely unbelievable. He wakes up in a strange house tied to the bed after arriving in very unusual circumstances yet he's more interested in the thought of being the beautiful stranger's willing sex slave than he is about trying to escape. We get told a lot about how attracted they are to each other but if I'm honest I just didn't feel the chemistry between them, it all felt very clinical and there wasn't enough of a build up for me to feel invested in their relationship.

Although this story is mainly focused on the romance there was also a bit of a suspense plot in the background with someone attempting to murder Lissianna. That could have added something to the book and made it much more interesting apart from the fact that a five year old would have been able to tell you who was behind the attempt pretty much the first time we met their character. It was so completely obvious that the perpetrator might as well have been walking around with "I'm a Vampire Hunter" tattooed across their forehead yet Lissianna didn't once think to question their weird behaviour. To put it politely Lissianna is an idiot, I think this quote says it all:

Lissianna shook her head, thinking it was rather amazing she'd survived to reach two hundred if she'd made many mistakes like that over the years.

Honestly I'm not sure how she made it to 200 either, she made so many stupid mistakes when it came to feeding that I stopped counting them but I feel like I spent half the book rolling my eyes at her.

I'm just so disappointed that this book didn't work for me because I had such high hopes for it in the beginning. I am kind of tempted to give the next book a try though, first books in a series can always be a bit hit and miss and since this series is still going strong after 24 books have been published there must be something good about it. So I may give it a second chance at some point but unfortunately I don't think I'll be in any rush, not when there are so many other books on my TBR pile that I'm actually excited about reading.