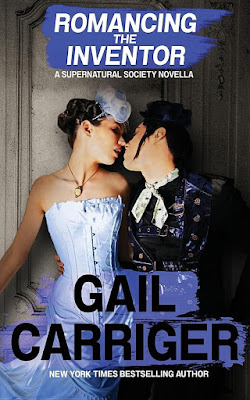 Imogene Hale is a lowly parlourmaid with a soul-crushing secret. Seeking solace, she takes work at a local hive, only to fall desperately in love with the amazing lady inventor the vampires are keeping in the potting shed. Genevieve Lefoux is heartsick, lonely, and French. With culture, class, and the lady herself set against the match, can Imogene and her duster overcome all odds and win Genevieve's heart, or will the vampires suck both of them dry?

Delicate Sensibilities? This story contains women pleasing women and ladies who know what they want and pursue it, sometimes in exquisite detail.

Supernatural Society novellas can be read in any order.

Review:
As a huge fan of Gail Carriger's Parasol Protectorate universe I was incredibly excited when I realised that she was finally giving my favourite female inventor, Genevieve Lefoux, a happily ever after. I loved Genevieve as a child in the Finishing School books and as a young woman in the Parasol Protectorate and now we finally get to see what happens to her after that series ended. Don't worry if you're not familiar with the series though, this story really does work well as a standalone so it would work as an introduction to the world (I'm sure you'll end up buying more books after this though!).

The story is told from the point of view of Imogene Hale, a young woman from a poor family who is working as a parlourmaid to help her parents make ends meet. She has a secret that would lead to her being ostracised but she was hoping taking a position working for the local vampire hive would allow her to explore her deepest, darkest fantasies without her family being any the wiser. The minute she sets eyes on Genevieve she knows she made the right decision but the inventor is wary of getting involved in a relationship so Imogene is going to have to use all her wiles to persuade her.

Romancing the Inventor is such an incredibly sweet, slow build romance and I totally fell for both of the main characters. Imogene is fairly innocent but she knows exactly what she wants and she's not going to let Genevieve get away from her without a fight. Genevieve is older and more experienced but she is also gun shy after her last relationship ended in disaster and she worries about corrupting the younger woman too. Working alongside each other they become fast friends but it's obvious that they're both incredibly attracted to each other and Imogene is determined to show Genevieve just how good they could be together.

I thought Gail Carriger did a wonderful job showing just how hard it would be to be a lesbian in Victorian times, in a society where women were expected to marry and produce children anyone who breaks from the norm was looked at with suspicion and could end up in a lot of trouble if they were caught in a delicate position. Imogene uses working for the vampires as a cover story but she really wanted to be there because she knows they have a reputation for being far more open to "perversions" and she's hoping that will give her the freedom to explore her own desires. I have to say I'm not a big fan the vampires in Countess Nadasdy's hive, apart from Lord Akeldama I much prefer the werewolves in this world, but I do love that they brought Imogene and Genevieve together.

I'm just really excited that Gail Carriger has decided to write stories about some of the LGBT characters from the main series and I'm already looking forward to the next book (which I believe may be about Biffy and Professor Lyall!).