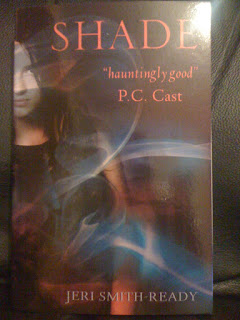 Aura's in love with two boys - but one of them's a ghost...
Can true love conquer all - even death?

Like everyone born after the Shift, sixteen year-old Aura can see and talk to ghosts.  She's always found this mysterious ability pretty annoying, wishing only that she could reverse it and have some peace.  But when her boyfriend, Logan, dies unexpectedly, Aura is forced to reconsider her connections to the dead...

Devastated by Logan's sudden death, Aura realises that her ability to see ghosts might actually be a blessing.  Surely a violet-hued spirit Logan is better than no Logan at all?  But just when Aura is coming to terms with having a ghost for a boyfriend, she starts developing feelings for her new friend Zachary, who is understanding, supportive and, most of all, alive.  Each boy holds a piece of her heart - as well as vital clues to the secret of the Shift - and it's time for Aura to choose between loving the living, or embracing the dead...

Review:
Like everyone born after the Shift Aura can see ghosts - everywhere she goes there are ghosts trying to talk to her, asking her to do things for them.  All she has ever wanted is for them to leave her alone - that is until her boyfriend Logan dies.  She'd rather have Logan's ghost in her life than lose Logan completely but it isn't easy having a boyfriend who you can't touch - can't kiss.  Then Aura meets Zachary, a new student at her school who has been assigned to help her with her history project.  Aura is investigating the mystery of what caused the Shift and Zachary has information that could help her if she can get him to open up and tell her everything.  Logan's family want to help Logan move on but is Aura ready to let him go?  Can she move on with her life when Logan's ghost is still with her?

I've heard great things about Shade from US bloggers so I was really excited when I received a review copy from Simon & Schuster.  Jeri Smith-Ready has created an interesting world that had me hooked from the very beginning.  I read a lot of paranormal stories so I really enjoyed this refreshing twist on the genre - I loved the idea of the Shift and the fact that only people born afterwards have the ability to see ghosts.  I can't imagine how hard it would be to have that ability but Jeri did a great job of describing it to us.  There is a lot of mystery surrounding the cause of the Shift, it doesn't seem like anyone really knows what caused it - if the government has any ideas they are keeping them secret! - but this adds to the story and I like the fact that we are finding out information alongside Aura.

Logan was a great character - a fledgling rock star who is on the verge of signing a record deal with his band The Keely Brothers (who both his brother & sister also play for) when a stupid drunken mistake ends his life.  The scenes of his death were heartbreaking and you really feel not only his pain and anger over what happened but also Aura & his family's suffering.  The differences in the way the pre-shifters and the post-shifters (who can still see Logan) deal with their grief was well defined and interesting to read.  How hard must it be to move on with life if you can still talk to the person you lost?  Would it be worse to be one of the people who can't see them when others around you can and refuse to act as if they have gone?  I really can't decide if I'd want to be one of the people who could still see Logan or one of the ones that couldn't!

Aura and the other teenagers in the story were well written and realistic they aren't perfect, they drink underage and have sexual relationships but none of this is glorified and I think you'll find a lot teens of their age act in a similar way.  I found Aura very easy to relate to especially with her mixed feelings about Logan and Zachary - she was in a difficult situation and I really felt for her.  While we're on the subject of Zachary I have to say I loved him.  He is so supportive of Aura and understanding about how she feels but he also knows what he wants and is prepared to work hard to get it.  He is keeping secrets from Aura and although she finds out some of them throughout the book I have a feeling there will be more to come in the sequel.

Overall I found Shade a thoroughly enjoyable read and would highly recommend it to fans of young adult paranormal stories.  Be warned that there is quite a cliff hanger at the end - I definitely want to get my hands on book 2 (Shift) as soon as possible.  We still have a lot to learn about the cause of the Shift and I'm really looking forward to finding out more.  Don't let the cliff hanger put you off though - it is well worth reading Shade & I'd recommend adding it to your buy list and getting hold of a copy as soon as you can.

Other Reviews:
I Was A Teenage Book Geek
If you have reviewed this book on your blog please leave a link to your review in the comments & I'll add the link here.