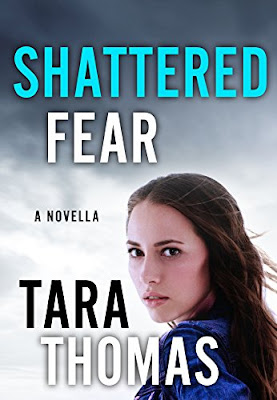 Welcome to the sultry streets of Charleston, where simmering desire and dark danger rule...

She’s got a killer to catch.
He just might be it.
Undercover detective Janie Roberts needs to find out for sure if Brent Taylor is a murderer.
Handsome, wealthy, and sexy-as-sin Brent Taylor.
She’s got to get close enough to learn his secrets.

But getting this close is dangerous in more ways than one…

Review:
Shattered Fear is the first of three prequel novellas in the new Sons of Broad series by Tara Thomas and it introduces readers to Detective Janie Roberts who is currently investigating a potential serial killer. Women have been going missing from a local bar and Janie is working there undercover looking for suspects. Wealthy businessman Brent fits the profile for the murderer perfectly and is currently her number one suspect but that doesn't stop her from finding him incredibly attractive and it doesn't take long for her to blur the lines between professional and personal.

This novella started out quite well so I hate to say it but it went downhill fast, Janie is supposed to be a brilliant detective but she completely loses all common sense simply because a handsome man is interested in her. Never mind that she thinks he might be a serial killer - he's so hot she's going to sleep with him anyway! The speed at which their relationship progresses was beyond ridiculous and that completely ruined the story for me. What woman in their right mind would have sex with a man she thinks is abducting and murdering women? I don't care if he looks like David Gandy, if I think a guy might murder me I'm not hopping in bed with him!!

I've since found out that the first three novellas in this series are all about this couple so I think the author and publisher have basically chosen to split what should have been a full length book into three parts but I really don't understand the reasoning behind that. I think this could have been really good as a longer story where Tara Thomas could have taken her time developing the romance but it's like she suspected readers wouldn't buy the rest of the story if she didn't include the couple hooking up in the first instalment. This is one of the worst cases of insta-love I've seen in a romantic suspense, it might have worked in a paranormal fated mates type trope but fails spectacularly in a contemporary setting.

I have to admit if I'd bought this novella myself I probably wouldn't be interested enough to carry on reading, mainly due to the speed of the romance but also because Janie was the most unprofessional and hopeless detective I've ever come across. She has no credibility as an intelligent woman or a trained detective and I highly suspect the murderer could run at her with a knife in his hand and she wouldn't have the brains to think him dangerous. As for Brent we've not been given enough information about him for me to feel invested in him as a character so at the moment I don't really care what happens to him. Because I was given all three novellas for review from the publisher I'm going to read the rest of their story to see if Janie manages to redeem herself and if I ever find her relationship with Brent credible but unfortunately I'm nowhere near as excited for this series as I was before.