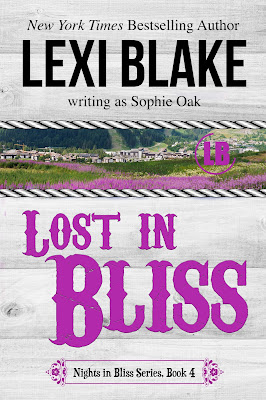 Laura Niles walked out the door and never looked back. As she left Washington, DC, her career was in ruins and her love life decimated. Her desperate flight eventually led her to Bliss, Colorado, where she managed to find a new home and a little peace. That will have to be enough because Laura cannot imagine finding happiness without the men she left behind.

For five years, Rafe Kincaid and Cameron Briggs have searched for the only woman they ever loved. When she disappeared, everything became crystal clear. For one night, everything had been perfect and instead of embracing what they had found, they let it all slip away. They had let worries about their FBI careers and what others might think destroy the most precious gift they had ever been given. Now they have finally tracked her down, and they want answers.

Laura is shocked when her former loves show up in her new home. When the full force of the FBI arrives with them, Laura knows that the quirky little town is in for a rough ride. The killer that ruined her life has been watching and waiting for the opportunity to strike again. For Rafe, Cam, and Laura it’s time for second chances — to stop a monster, and to reclaim everything they lost.

Review:
Laura worked for the FBI as a profiler but after her job put her in the crosshairs of a serial killer and nearly cost her her life she fled from DC and has never looked back. Now happily settled in Bliss she is doing her best to move on with her life but she's never been able to forget the men she left behind. Rafe and Cameron were FBI partners who worked alongside Laura and were both desperately in love with her. They felt like they failed her and blamed themselves for everything she went through but even though she left five years ago they haven't given up on finding her. Cam left the FBI so that he could focus on the search for Laura while Rafe remained with the FBI to continue trying to track down the serial killer who targeted her. Finally Cam has a lead on Laura's location but in trying to get their woman back have they just put her back in the crosshairs of a killer with unfinished business?

I always love getting the chance to go back to Bliss and catch up with all the quirky characters who live there, it just seems like such a fun place to live and I really enjoy how supportive the whole town is. The people who live there may be a weird bunch but they look out for their own and nobody judges anyone for their lifestyle choices so it's a really inclusive place. Laura has settled into the town well, she's made good friends and she's happy with her life there but she's never forgotten Rafe and Cam or felt ready to move on in a new relationship.

I normally love the menage relationships in this series but I have to admit I struggled with this one in the beginning mainly because Rafe and Cam didn't really seem keen on the idea themselves. It was more something they seemed willing to go along with because they both loved Laura and she couldn't choose between them but for a lot of the story they didn't seem too happy about that. I think that's mainly because their friendship has suffered so much since Laura left, they both blamed themselves (and to a certain extent each other) for what happened to Laura and it had put a wedge between them. It took a while but eventually they were both able to admit that they had missed each other and not just Laura so although there was zero romantic interest between them they did have a strong, more brotherly, kind of love. Once they decided to work together it became a lot easier to get invested in their relationship and I could easily see why Laura didn't want to pick one over the other.

As with all the books in this series there is also a hint of danger as it appears yet another serial killer may be at work in Bliss. I was pretty convinced I knew who the killer was, in fact I thought Lexi Blake had made it too easy to guess, but I should have known better because it turns out I was completely wrong. It was fun to catch up with previous couples and I really enjoyed getting to know Wolf (Leo's brother) better. I definitely think we're going to get his book soon and it's one I'm definitely looking forward to.