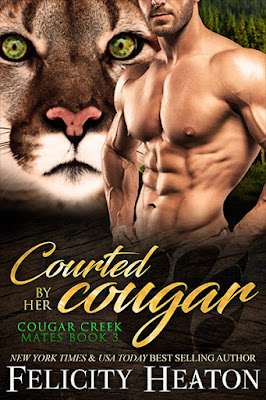 Madness is sweeping through Cougar Creek, and Flint wants no part of it. The fever has two of his brothers in love already, and Flint is damned if he’s giving up the bachelor life to tie himself to one female, but when a perimeter sweep has him running into an exotic and enthralling beauty who rouses his instincts as a cougar shifter and a male, the hunt is on.

All Yasmin is interested in is making sure her friend, Ivy, is safe, but the alluring black-haired man with a wicked smile she meets on the path to the creek has her thinking about other things. When an incident at Cougar Creek leads to her revealing a secret, and Flint’s persistence pushes her to a rash decision, her entire world is in danger of being turned upside down.

With the gathering in full swing, and males determined to prove their worth to Yasmin, Flint discovers he’s not immune to the madness sweeping through the creek, because he’ll do whatever it takes to claim victory and win Yasmin’s heart… no matter how dangerous it is.

Review:
Flint is the youngest of the cougar brothers and he's haunted by the fact that he was too young to fight when their pride was attacked and his parents were killed. He blames himself for not being able to help protect them so he throws his energy into protecting the pride during their gatherings with his brothers. He is bemused by the mating frenzy that seems to have taken over his brothers and determined not to get caught with a mate himself because he has no intention of settling down enough to risk his heart.

Yasmine has come to Cougar Creek searching for her best friend Ivy, she's very protective of her friend and wants to make sure she is happy and safe. The last thing Flint needs is another human around the place but Yasmine isn't as easy to get rid of as he expected and it turns out her medical knowledge could be helpful if she is willing to teach Ivy and the brothers more skills to look after their people. Of course keeping the fact that they are immortal cougar shifters hidden from another human isn't going to be easy but it turns out Yasmine has a few secrets of her own that she doesn't want exposed too.

Courted by her Cougar is the third book in this series but I think the stories all standalone if you're not up to date. I'm enjoying getting to know each of the brothers and I really liked both Flint and Yasmine but I have to confess I'm not a huge fan of the cougar culture that we saw in this book. Some of the males can be pretty brutal to each other when they're trying to prove themselves and claim a mate and I found that a bit off-putting even though it wasn't Flint or any of the main characters who were actually causing trouble. I loved that Yasmine wasn't what she seemed and that she stood up for what she believed in and wasn't going to let anyone tell her how to live her life. She seemed to understand Flint really well and I think they'll be good together.