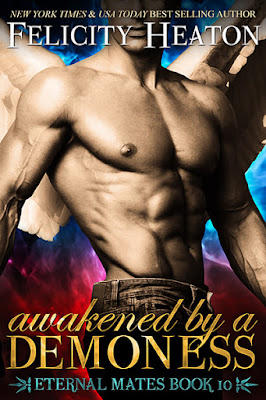 Asteria of the Second Legion of demons has messed up. Royally. With a capital everything. Certain that her dark lord is about to end her in the most painful way imaginable, she’s stunned when the fallen angel offers her an uncharacteristic shot at redemption—and determined not to fail him again. With her life on the line, she sets out on a mission that sounds easy but proves to be far from it when a hot slice of angelic eye candy comes storming into her life, stirring dangerous desires and tempting her more than any male before him.

Fifth Commander of the Echelon, the highest order of angels in Heaven and those responsible for hunting demons, he will allow nothing to stand in the way of fulfilling the mission he began close to a century ago so he can finally return to his home. On the verge of securing the half-breed he has been hunting, he can almost taste victory—until a sassy demoness struts into his life, awakening wicked needs and forbidden hungers that will test him to his limit.

When their mission brings them on a collision course, can they fight the fierce heat of the passion that blazes between them to claim a victory for their side or will it burn their resistance to ashes and set their hearts on fire with a love both forbidden and eternal?

Review:
I've been a fan of the Eternal Mates series since the very beginning but I have to admit I was a little nervous when I realised that the couple in Awakened by a Demoness were both characters we haven't met before. From previous experience I tend to enjoy the books more when they're about characters that I'm already invested in and when they are part of the larger ongoing story arc but I'm happy to say that I was pleasantly surprised and I actually think this is one of my favourite books in the series.

One of the things I love so much about these books is the huge variety of supernatural creatures that Felicity Heaton has added to the mix. We've seen elves, shapeshifters, dragons, witches and more but now it's the turn of a feisty demon and an angel who is rather stuck in his ways. This really is a case of opposites attracting and boy do they attract in the best possible way.

Asteria messed up her last job and is fully expecting to be tortured by the devil as punishment so it comes as quite a shock when he gives her one last chance to redeem herself. All she has to do is track down a single half-breed woman and bring her to hell. Sounds simple but she isn't the only one who has the half-breed in her sights and heaven want to capture the woman just as badly. In fact, they've sent a member of the Echelon, an elite demon hunting angelic task force, to give them the best chance of winning. The two natural enemies cross paths in their rush to find the prize and neither is willing to back down from their goal. Everything changes when the half-breed shares a shocking secret though and now Asteria and Rey are forced to question everything they've ever been told.

On the surface Asteria and Rey couldn't be more different, not just in their choice of home but in their attitudes to life and the way they look at things. Asteria is fun loving and playful, she doesn't take life too seriously but she goes after the things she wants with a single minded focus. Rey on the other hand is much more composed, he is very aloof and holds himself at a distance from everyone around him. In spite of their differences they do actually have more in common than you'd first think but I'll let you discover those similarities for yourself.

I thoroughly enjoyed this story, it was a fast paced and fun story with great characters and fantastic chemistry. Although this book is set in the Eternal Mates world it actually works really well as a stand alone story but I do wonder if we could be seeing the beginning of a new story arc introduced. It'll definitely be interesting to see who the next couple are and whether there is any continuation on from this one.