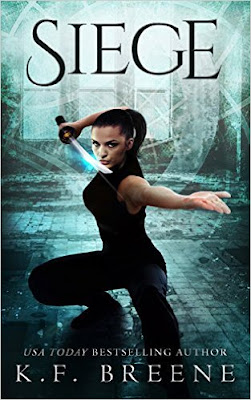 The land has become unnaturally quiet. It's as if everyone is waiting for some sign that Xandre can be beaten. That someone will stand up to him, and win.

With Shanti calling the shots, and Cayan's battle know-how, it seems certain that the Chosen can be the catalyst. That they can lead the oppressed to freedom.

But Xandre didn't become the Being Supreme by chance, and he doesn't intend for his rule to be stripped away so easily. He has already started to gather his forces, and with the entire land under his control, gaining a foothold seems impossible.

The final battle is brewing, and the winner is anything but decided . . .

Review:
Everytime I think this series can't get any better K.F. Breene proves me wrong and Siege is without a doubt my favourite book so far. The action is pretty much non stop from the first page and you can really tell that things are ramping up in anticipation of the final battle against Xandre.

Now that Shanti and Cayan have been widely recognised as the Chosen they are slowly starting to increase the numbers in their army. They already have Cayan's well trained forces, along with all the new female recruits after the women showed what they were made of in the last book, but now they also have the Shadow and Shanti's people who are slowly coming out of hiding and gathering together. All three groups have very different fighting styles and abilities so it's up to Shanti and Cayan to try and bring them together into a cohesive unit and find a way to get the most out of everyone. Obviously there are tensions between the different groups but I'm really enjoying seeing them learn to get along and all the culture clashes added a lot of humour to the story.

For a long time Shanti and Cayan have been putting off a direct confrontation with Xandre but things are finally reaching a point where they have to go on the offensive if they want to have any hope of coming out on top. They still don't have the numbers that Xandre does but what they do have is loyal fighters who are incredibly determined to win. One thing I found really interesting was seeing how downtrodden townsfolk react to rumours of the Chosen or the Wanderer, the prophecies about Shanti are an inspiration to so many and she gives them the courage to stand up for themselves and fight against all odds. We get to see a few familiar but unexpected faces from previous books that shows just how well K.F. Breene has been laying the groundwork all along.

All of our favourite characters are given a chance to shine here, of course you have Shanti who, along with her equally stubborn and vicious war horse,  kicks butt and takes no prisoners everywhere she goes, then there's Cayan whose fighting prowess and leadership abilities have never been in question but you also have the Honor Guard with characters like Marc who isn't really the best fighter but does what he has to to survive and Rohnan who is incredibly loyal to Shanti. Sanders has always been a particular favourite of mine, he may have some very outdated (and quite sexist) views but even he can't deny that the female soldiers have their uses and he always adds a huge amount of humour to every scene he appears in. One of my favourite conversations in the book was this one between Sanders and Shanti:

“Take care of it,” he demanded of Shanti over his shoulder. “We don’t need a bunch of dicks wagging around this city.”

“You already have a bunch of dicks wagging around the city,” Shanti yelled back. “They’re the ones barking orders.”

I'm sad that the next book will be the last in the series but I'm loving the direction the story is heading and I can't wait to find out how everything ties together. The Warrior Chronicles series is one of my favourites, you have all the qualities of a kickass urban fantasy heroine but in a more traditional fantasy setting and I'm loving every minute of it!