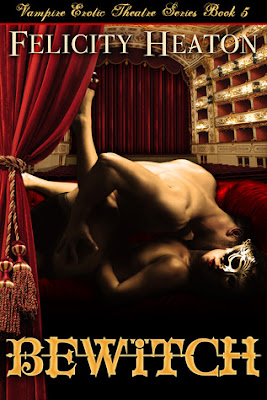 A vampire with a past stained with blood and a soul tainted with darkness, he is perfect in his self-control, never surrendering to his darkest desires. Now a beautiful witch in the shadowy fae underworld threatens to reawaken long denied hungers and tempts him with carnal pleasure.

Payne despises the incubus side of his mixed genes and refuses to give it free rein, but when the wickedly sexy Elissa offers him a possible way to help a friend, he finds it difficult to resist paying the price, even if it will be his undoing—one night of passion at her command.

Elissa is a witch down on her luck until Payne comes crashing into her life. The dangerously handsome male is the key to fulfilling a promise she made, but he is also forbidden, and surrendering to the wildfire passion he stirs within her means risking ruin and death.

When one incredible night of fulfilling their deepest fantasies leads to more than just a pathway to keeping a promise and saving a friend, will they be able to overcome the barriers that stand between them and forever?

Payne has promised his friend Andreu that he will help find a solution to the curse that was placed on Varya but he seems to be running out of options. Everything he has tried so far has failed and his last chance is to find someone from the fae realm who can help him get his hands on a very rare artefact that might break the spell. Unfortunately it isn't easy to get any of the fae to trust someone who is half vampire and half incubus. That is where the witch Elissa comes in, she has her own reasons for helping Payne but only if he will return the favour. She will help him find the artefact but only if he helps her recover something precious that was stolen from her and has been hidden in the same location.

I already knew that I was going to love Payne's story and I'm so glad that he lived up to my expectations. We get to know him so much better here and we finally understand why he hates his incubus side so much. He has a dark past, one that broke my heart to read about, so I really was pleased to see him get a happy ending. Payne gives new meaning to tortured heroes, his vampire and incubus sides are constantly at war with each other and he has spent so long being afraid of his incubus side that he has lost the ability to control his powers. It makes him terrified of making a mistake and hurting Elissa but she is determined to break through his tough shell and act on the chemistry between them. If you've read any of the previous stories in the series you'll be expecting a hot read but trust me this was the most scorching one yet and I'm surprised that Payne and Elissa didn't melt my kindle!

Both of these characters have very good reasons not to trust each other and they are both wary of getting hurt again so one of the things I really appreciated was how naturally their relationship develops. They slowly grow to trust each other as they spend more time together. One of the things I loved the most about Elissa was the fact that she saw the whole of Payne, even the parts he tries so hard to keep hidden. It is thanks to her help that Payne finally starts to accept who he is and feels like he can put his past behind him and look towards the future.

If you're looking for a hot, spicy read with elements of kink and a real emotional connection between the characters then Bewitch is just want you need. Another fantastic instalment to a wonderful series and I'm dying to get my hands on the next book to finally have the chance to read Snow's story!

Other reviews of this book:
Book Loving Pixie
If you have reviewed this book on your blog please leave a link to your review in the comments & I'll add the link here.