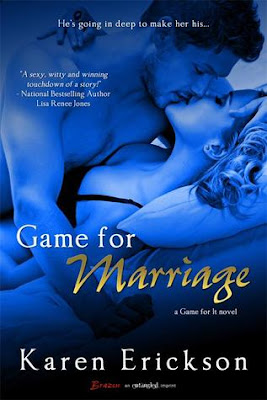 He’s going in deep to make her his…

Struggling artist Sheridan Harper never imagined she’d spend a sizzling night with Jared Quinn, the smoking-hot star quarterback of her local professional football team, the San Jose Hawks. And she’s even more shocked when Jared’s publicist offers her a proposition: a fake marriage to keep Jared out of the gossip mags. Being that close to Jared would be too tempting, so to protect her heart, she insists on secretly including a clause forbidding sex between them.

Jared just wants to keep his starting QB job and keep it in San Jose. His reputation as a ladies’ man has landed him in the headlines one too many times, but there’s something about his kind, passionate new wife that tempts him beyond reason. Any sort of intimacy between them is completely forbidden, but as their bodies fall in deep, will their hearts follow suit?

Game for It Series:
Game for Marriage
Game for Trouble
Further titles & release dates to be confirmed

Review:
I'm on a massive contemporary romance kick at the moment and I know I can rely on the Entangled Brazen imprint when I'm looking for a book with great characters, super hot chemistry and a fun, flirty romance. Once again they have hit the spot with Game for Marriage by Karen Erickson and I devoured this book in one sitting (staying up until 4am to finish it!)

Jared is the star quarterback but his womanising ways have got him in hot water with the team's new owner who is looking to clean up the team's image. If he wants to stay with the team he loves then Jared has to do something about his reputation and the team's publicist thinks that the best way for him to do that would be to get married. The last thing he wants is a serious relationship and he's not at all keen on the idea of getting married but it doesn't look like he has much of a choice. When he meets the sweet, sexy, down on her luck artist Sheridan sparks fly and after one amazing night together Jared thinks he can work this whole marriage thing to his advantage, if he has to stick with one woman for a year then he might as well be with someone he can't keep his hands off of! Sheridan is reluctant to spend more time with Jared knowing that she could end up getting her heart broken but she desperately needs financial help to keep her gallery going. Thinking that adding a no sex clause to the agreement will keep her heart out of the mix she agrees to marry Jared. It's turns out to be impossible to ignore the sparks between them but will they be able to keep their emotions separated?

I liked Jared immediately, he's a sexy guy and he knows it which can make him come across as a bit arrogant but it's the kind of arrogance that manages to stay on the right side of sexy without stepping over into ass-hole territory. As a single guy with women practically throwing themselves at him he is more than happy to take them up on their offers but at the same time it was obvious that not all of the stories that earned him his reputation were actually true. He is actually a really sweet guy and didn't even consider looking elsewhere when Sheridan insisted on the no sex clause in their marriage contract. Jared obviously cares a great deal about his team and wants his family to be proud of him, he also respects Sheridan and wants to help her keep the gallery that she loves so much. It doesn't hurt that he is sexy as hell but he really was the kind of guy most girls wish they could meet in real life.

Sheridan was also a likeable character, she is wary of getting her heart broken but everything she does she goes at full throttle and doesn't hold anything back. She doesn't look at Jared as a meal ticket and isn't interested in him because of his fame or money. As much as she needs his help financially now it isn't because of a lack of hard work on her part and you just know she can make a success of her business on her own merits. I loved the way she saw the Jared that nobody else did, she saw the way he was constantly putting everyone else's needs before his own and she wanted to be the one who put him first for a change. The chemistry between Sheridan and Jared was off the charts but because of the no sex clause it was a long time before the were brave enough to take things further. That lead to some fantastic teasing scenes between them that really helped to build anticipation for the main event. I think one of the things I enjoyed most was seeing them getting to know each other outside of the bedroom though. When they get married they know practically nothing about each other but as they spend more time together you can see the mutual respect grow as they slowly fall in love.

If you're looking for a sweet and sexy contemporary romance that isn't full of needless angst then Game for Marriage will hit the spot perfectly. I'm exited that this is the first book in a new series and I can't wait to get my hands on the next instalment which I really, really hope is going to feature Sheridan's friend Willow and Jared's team mate Nick. There was obviously some history between the two of them and I definitely want to know more! 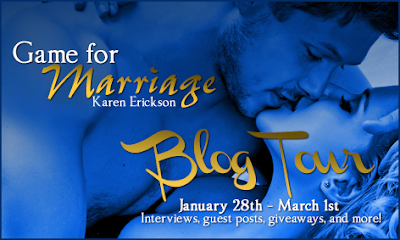 As part of the blog tour Karen Erickson is offering readers the chance to win a $50 voucher to either Amazon or B&N. You can enter the giveaway using the rafflecopter widget below. The winner will be chosen by Karen and contacted by her to arrange the prize.