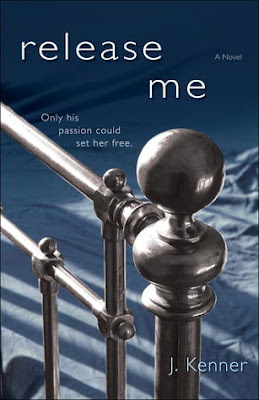 Damien Stark could have his way with any woman. He was sexy, confident, and commanding: anything he wanted, he got. And what he wanted was me.

Our attraction was unmistakable, almost beyond control, but as much as I ached to be his, I feared the pressures of his demands. Submitting to Damien meant I had to bare the darkest truth about my past - and risk breaking us apart.

But Damien was haunted, too. And as our passion came to obsess us both, his secrets threatened to destroy him - and us - for ever.

Stark Trilogy:
Release Me
Claim Me (July 2013)
Complete Me (release date to be confirmed)

Review:
Nikki first met Damien when she was taking part in a beauty pageant, she was attracted to him but he was there with someone else and she was too tongue tied to talk to him. Now, several years later Nikki has left beauty pageants and her very controlling mother behind her. She has finished her degree and is looking to get experience in the business world before starting her own company. When her boss asks for her help convincing a wealthy investor to help fund their new project the last person Nikki is expecting to see is Damien. The attraction between them is stronger than ever and now Damien has a proposition for Nikki, he wants her to pose for a painting and he is prepared to pay her a lot of money to do it, enough money for her to start up her company. He has one major condition though - for the time it takes to complete the painting Nikki must submit to his every desire. Considering how attractive Nikki finds Damien she finds it surprisingly easy to agree to his terms, there is just one thing that bothers her and that is letting Damien see the scars that she keeps hidden from the world. Nikki isn't the only one who is damaged though, Damien's scars may not be visible but they still have just as much of an effect on him. Can two seriously messed up people really find a future together?

I have to admit that I'm a sucker for anything that is compared to Fifty Shades & Bared to You, I love both of those series and can't seem to get enough of controlling, alpha billionaires with a bit of a kink fetish. I'm always a bit wary when I pick up a new series though, I've been burnt a few times now by stories that don't live up to the hype so I tend to be a little sceptical going in. Thankfully Release Me surpassed my expectations and I really enjoyed it, the story is well written with likeable characters and actually stands out as it's own story rather than a complete copy of the other books mentioned. Yes there are similarities but I was expecting that and that was what I wanted! There are also enough differences to make this an enjoyable story in its own right.

Nikki and Damien both come from backgrounds with controlling parents who forced them into something that they didn't really want to do, Nikki with the beauty pageants and Damien playing professional tennis. They both struggled to deal with the lifestyles they were leading, Nikki turned to cutting as a form of release but we know a lot less about Damien's coping methods. Nikki's mother is a nasty piece of work, she is obsessed with looks and catching a rich husband, everything is about appearances and she constantly belittles Nikki for not doing the right thing or acting in the right way. It is no wonder that Nikki struggled to cope as a teenager and that she has tried to get as far away from her mother as possible as an adult. I have to admit I felt quite sorry for her! It is obvious that Damien has issues from his upbringing too but we haven't even started to scratch the surface of his problems. He plays things very close to his chest and he likes to be in control of everything around him but I didn't see him as a hardcore Dom and I liked the way he was so caring towards Nikki. I never felt that he was trying to push her into something that she wasn't comfortable with, he pushes her past her boundaries but in a gentle way that you can tell she is enjoying. He never tries to change her into something that she isn't he just shows her a side to herself that she wasn't fully aware of.

I don't think it will come as any surprise if I tell you that I have developed a crush on Damien, he's right up there with Christian and Gideon. In fact in some ways I think I liked him more! I loved the chemistry between him and Nikki, they have a great physical connection and I also enjoyed seeing them learn to trust each other and start sharing their secrets. Like I said I think we've hardly even started getting to know Damien and I'm really looking forward to learning more about him as the series continues. This is definitely another series that is being added to my must buy list and I'm glad we don't have to wait too long for the next instalment. If you're looking for something to fill the void after FSoG or take your mind of the wait for the final Crossfire book then Release Me will definitely hit the spot and I'm looking forward to reading more from J. Kenner in the future.