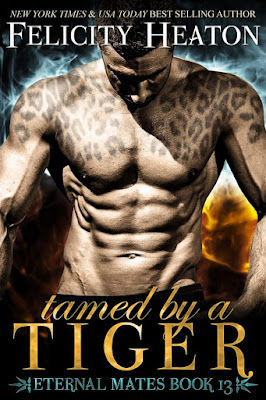 A snow leopard shifter in the prime of his life, the last thing on August’s mind is tying himself to one female. He welcomes a different one to his bed each night, or at least he had until five months ago when he became alpha. The duties and pressures of running his pride have his libido dead on arrival—until a trip to London to discuss business with the former alpha lands him in the path of a beautiful, bewitching tigress who awakens a passion in him that flares white hot and a need of her that consumes his every moment.

Promised at birth to a male she has never met, Maya has left her pride behind to go to the tiger alpha who is to be her mate, but she can’t leave without saying goodbye to her older brother, Talon. A stop in London at Underworld to see him one last time turns out far different, and far more dangerous, than how she had imagined it when she sets eyes on an alluring crimson-haired stranger who stirs new, unbidden feelings in her, desires that rouse her fiercest and most frightening instincts and demand she stake a claim on him—her fated mate.

Will Maya be strong enough to place her pride and her family’s safety before the desires of her own heart? And will August unravel his feelings for the black-haired beauty before it’s too late and he loses her forever?

Review:
August took over as Alpha of his pride when his cousin Cavanaugh abdicated to be with his mate Eloise. The responsibility weighs heavy on his shoulders and with upcoming trade negotiations August has come to Underworld to ask for Cavanaugh's advice. Maya is a tiger shifter who was promised to the alpha of another pack at birth, the last thing she really wants is to move away from her home to be with a man she's never met but she feels she owes it to her pack and to her parent's memory to do what they planned for her. Travelling with her brother Grey to Siberia for her wedding they stop in at Underworld to visit their other brother Talon so she can say goodbye. The last thing she expects is to find her fated mate, especially not in the form of a snow leopard alpha. As much as she longs to be with August she knows a future between them is impossible and she fears backing out of her arranged marriage would put her pack in danger but can they find a way to be together against all the odds?

I really enjoyed Tamed by a Tiger, this series has always been a favourite of mine but I've been enjoying getting to know this family of tiger shifters and I'm really hoping that Grey's book might be next! Maya is in a really difficult position, her oldest brother who is the pack alpha, has ordered her to go ahead with the marriage her parents arranged for her but her two other brothers are dead set against the idea. They've both heard terrible rumours about her future husband but that only makes her more fearful that if she doesn't go through with it her fiancé will attack everyone she loves and attempt to destroy her whole pack. As much as she longs for a different future she knows what needs to be done but she wants to claim one powerful memory of her own to see her through the difficult future that lies ahead of her.

August is drowning in a responsibility he never asked for since he took over as alpha, it's a position he has very little experience for but he's determined to do a good job and keep his people safe. He's immediately drawn to Maya but being a foolish man he doesn't recognise the signs that she is his fated one. He is so blind to the possibility that he almost loses her forever but luckily he comes to his senses in time. The snow leopards have a lot of stupid traditions about mating within a strict hierarchy so even when Cavanaugh found his fated mate they wouldn't accept the match because she wasn't high born enough. That means that they'll never accept an outsider as their alpha's mate but August has had just about enough of a useless tradition that is only hurting the people he cares about so he's determined to change the way things work.

I don't want to say too much more but I really enjoyed the romance between Maya and August, things happen very quickly between couples in this series - that whole fated mates thing means emotions become involved very quickly - but somehow it just works for me every time. I guess because I know what I'm getting going in and Felicity Heaton always does such a brilliant job of creating a connection between her characters that goes beyond the physical. This was another great instalment to a series that is still going strong and I'm already looking forward to the next one.