Magonia by Maria Dahvana Headley is a book that's been on my radar for a long time now but it's not really one I've seen many UK Bloggers talking about and only a few of my international friends have reviewed it on Goodreads. I was drawn to it because of that beautiful cover but the synopsis makes it sound just like my kind of read so I really am going to have to buy a copy soon so I can see if it lives up to expectations! Plus it's been blurbed by Neil Gaiman so that means it has to be amazing right? 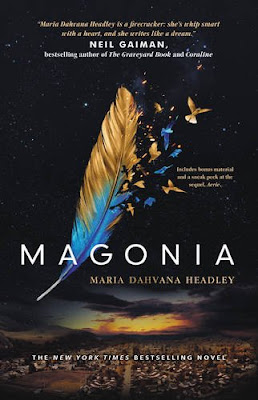 Since she was a baby, Aza Ray Boyle has suffered from a mysterious lung disease that makes it ever harder for her to breathe, to speak—to live. So when Aza catches a glimpse of a ship in the sky, her family chalks it up to a cruel side effect of her medication. But Aza doesn’t think this is a hallucination. She can hear someone on the ship calling her name.

Only her best friend, Jason, listens. Jason, who’s always been there. Jason, for whom she might have more-than-friendly feelings. But before Aza can consider that thrilling idea, something goes terribly wrong. Aza is lost to our world—and found by another. Magonia.

Above the clouds, in a land of trading ships, Aza is not the weak and dying thing she was. In Magonia, she can breathe for the first time. Better, she has immense power—but as she navigates her new life, she discovers that war between Magonia and Earth is coming. In Aza’s hands lies the fate of the whole of humanity—including the boy who loves her. Where do her loyalties lie?

More about the series from Epic Reads:

If you've read this one please do leave me a link to your review in the comments!
at 18:00