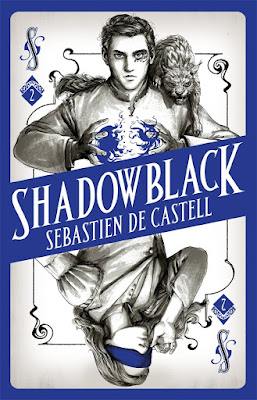 A Shadowblack plague is taking hold . . . The second book in the page-turning SPELLSLINGER fantasy series.

It's a few months since Kellen left the Jan'Tep people. Now aged sixteen, Kellen is an outlaw, relying on his wits to keep him alive in the land of the Seven Sands. He misses home, he misses family and more than anything, he misses Nephenia, who he once loved.

Then he meets Seneira, a blindfolded girl who isn't blind, and who carries a secret that's all too familiar to Kellen. Kellen and Ferius resolve to help - but the stakes are far higher than they realise. A Shadowblack plague is taking hold - and Kellen can't help but suspect his own people may be behind it.

Review:
Shadowblack picks up Kellen's story several months after the end of Spellslinger, now an outcast amongst his own people, Kellen is currently travelling through the Seven Sands with his mentor the Argosi Ferius, and Reichis, his violent squirrel-cat sidekick. Life isn't easy as an outlaw and the group are living by their wits trying to stay ahead of the Jan'Tep mages who have been sent after them but life gets even more complicated when they come across another Argosi and her charge. Seneria isn't a member of the Jan'Tep but she has been afflicted with the same mysterious Shadowblack illness as Kellen, it looks like a plague has broken out in the Seven Sands and both Kellen and Ferius feel duty bound to investigate it.

I was a little surprised at the direction that this book took, I think I was expecting to see more of the Jan'Tep and a confrontation with Kellen's family but I actually really enjoyed getting to explore a bit more of this world and having the chance to meet other characters who aren't mages. Seneria was an great character but it was Dexan, a fellow Spellslinger like Kellen, and Rosie, another Argosi, who I was most interesting. I've been wanting to know more about the Argosi way of life and we did start to get answers to some of my many questions here, Ferius is as closemouthed and guarded in her answers as ever but Rosie is a little more willing to explain herself. It was really interesting to see how both Argosi interpreted their roles so differently and were on completely different paths despite having very similar beliefs. Dexan was one of those characters who always looks out for themselves but he definitely made life interesting so I hope we'll get to see more of him.

Of course Reichis continues to steal the show for me, he's just such a funny character and I love how he always thinks violence is the answer. His constant threats to eat people's eyeballs always have me laughing and I really do think that every book should have its own murderous squirrel-cat to lighten the mood! Shadowblack has raised the stakes for the series, we're starting to uncover more about what is going on in the wider world and now it's up to Kellen to decide what he is willing to do about it. He has several options available to him at the end of this story and I think the decision he makes says a lot about the kind of man he's turning into. I'm already enjoying this series a lot and I'm really looking forward to seeing what happens next.