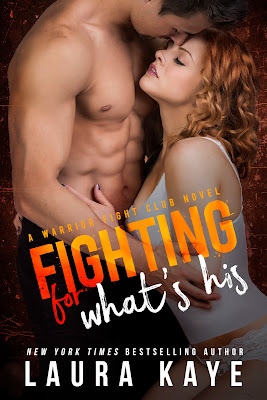 This fight club has one rule: you must be a veteran...

Resisting her only makes him want her more...

Private investigator Billy Parrish is good at three things—fighting, investigating, and sex. MMA training with the other vets in the Warrior Fight Club keeps his war-borne demons at bay—mostly, and one night stands ensure no one gets too close. But then his best friend from the Army Rangers calls in a favor.

Shayna Curtis is new to town, fresh out of grad school, and full of hope for the future. With a new job starting in a month, she’s grateful when her brother arranges a place for her to stay while she apartment hunts. But she never expected her roommate to be so brooding. Or so sexy.

Billy can’t wait for Shay to leave—because the longer she’s there, the more he wants her in his bed. To stay. He can’t have her—that much he knows. But when fight club stops taking off the edge, Billy lets down his guard…and starts fighting for what’s his.

Warrior Fight Club Series:
Fighting for Everything
Fighting for What's His
Worth Fighting For (Part of the Kristen Proby Big Sky Crossover Collection)
Fighting the Fire (Coming Soon)

Review:
Laura Kaye always writes the most heart-warming romances and Fighting for What's His is no exception to that. Shayna and Billy's story was everything I'd hoped it would be and then some with brilliant chemistry right from the beginning but a slow build on the romance as they gradually got to know each other before giving into the lust they'd both been feeling from the moment they met.

Shayna is new in town and looking for a fresh start so her brother has arranged for her to stay with one of his best friends temporarily while she is settling into her new job and looks for a long term place to live. Billy is an ex Ranger who served with Shayna's brother Ryan before he was injured in an ambush and who now works as a private investigator. He's not really looking forward to having his friend's little sister cramping his style but he's not one to say no when a friend needs a favour. The last thing he is expecting is to find himself actually enjoying having someone to come home too and he definitely can't act on his growing feelings for fear of crossing a line his friendship might not recover from but those feelings are getting harder and harder to ignore.

I loved the slow build of this one and really enjoyed seeing Shayna and Billy getting to know each other and just enjoying spending time together. It was obvious from the beginning that they were attracted to each other but they both have reasons for being reluctant to act on it so this was definitely a slow build romance where the friendship comes first. They both have things in their pasts that they feel guilty for and that shared sense of survivors guilt really helps bond them together because they both understand exactly how the other person feels. They're a very sweet couple and there is very little in the way of drama between them which is something I really appreciate when I'm just looking for a hot and sexy story.

As much as I enjoyed them as a couple I also really liked seeing more of the other members of Warrior Fight Club and I'm looking forward to quite a few of their stories. There is obviously a sense of attraction between a couple of members but they're fighting it pretty hard right now so when they give in I'm pretty sure it'll be explosive. I'd also really love to see Mo get a book, he's been such a brilliant side character in both books in the series so far and I want to see him find his own happy ending. I'm always greedy for more books from Laura Kaye though so whoever is up next you can guarantee their book will be right at the top of my wish list!