I'm really excited to be taking part in the blog tour to celebrate the release of L.L. McKinney's debut novel A Blade so Black today. I've wanted to read this book ever since I saw it described on twitter as "an Alice in Wonderland retelling but what would have happened if Buffy had fallen down the rabbit hole". Trust me it's even more amazing than it sounds, make sure you check back later today and you'll be able to read my full review then!

In the meantime I want to tell you all about the book and I have a fantastic guest post from L.L. McKinney to share with you. 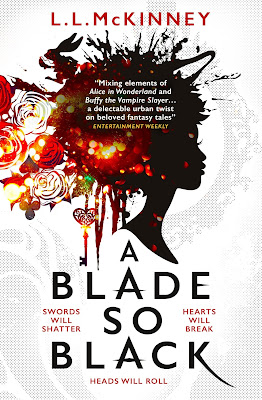 The first time the Nightmares came, it nearly cost Alice her life. Now she's trained to battle monstrous creatures in the dark dream realm known as Wonderland with magic weapons and hardcore fighting skills. Yet even warriors have curfew.

Life in real-world Atlanta isn't always so simple, as Alice juggles an overprotective mom, a high-maintenance best friend, and school. But when Alice's handsome and mysterious mentor is poisoned, she has to find the antidote by venturing deeper into Wonderland than she's ever gone before. And she'll need to use everything she's learned in both worlds to keep from losing her head . . . literally.


Now please give a very warm welcome to L.L. McKinney who is here to tell us all about the guests she would invite to her Mad Hatters Tea Party!

A Mad Hatters Tea Party: if you could invite any fictional characters to dinner who would they be (and why) and what would you serve them?

Wow. That’s…a hard question. There are so many characters I would love to invite! I’m gonna pick five, because that seems like a safe number. Here they are, in no particular order.

I’d pick Camellia Beauregard from Dhonielle Clayton’s THE BELLES. She probably knows more about what goes into hosting a tea party than I do so I’d be able to ask her for help. I’d like things to have a hint of the traditional, because it seems like it would be a bit of fancy fun! Hopefully Camellia would be able to bring some teacup animals and maybe give us a few beauty touchups. Small things, longer lashes, arched brows, nothing over the top. For her, I’d have all the sweets. Cakes, candies, every sugared delight imaginable.

I’d pick Louis from Anne Rice’s INTERVIEW WITH THE VAMPIRE. I know that the fan favorite is Lestat, and while I do love me some Brat Prince, Louis was the character I adored most in the stories and who I enjoyed reading about whenever he was on the page. To this day I’m salty he wasn’t in the movie Queen of the Damned, but I’m also relieved because that…that was a mess. Except Aaliyah, she was flawless. Since Louis is a vampire, I’m fairly certain it’s obvious what he’d be served.

I’d pick Puck from the Gargoyles television series. Nothing here said they had to be strictly book characters. Puck is my favorite from that show. He’s fun and funny, just delightful. He’d no doubt keep all of the guests entertained, or annoyed, and that would keep me entertained. That’s the important part. Plus it’s always nice to have a legit magic trick on standby. You never know what you’re gonna get with Puck, and that keeps things exciting. As for what I’d serve him? No clue. I’m sure he could conjure up whatever he liked, or trick someone into fetching it for him.

I’d pick Storm from X-Men because…I mean…it’s Ororo. She’s the queen. The goddess. The literal force of nature. I’m sure she’d have all sorts of wisdom to impart, as well as ALL the tea from the team and what nonsense everyone is getting up to. Honestly, I’d just want to sit in the same room as her, breath the same air as her. Plus, no matter what time, she’d make sure the weather was perfect. I’m not sure what Ororo’s favorites are, but she’s more than welcome to the sweets lain out, and I’d make sure to try and get some savory things on the menu, some stuff with spice. For some reason, she strikes me as a woman who likes a bit of kick.

Last, but not least, I’d pick Spider-Man. I’m a huge fan. Always have been. He’s my favorite hero ever. And Peter Parker always seems to be down on his luck, so I’m sure he’d appreciate a free meal. He’s funny as hell and always working and trying so hard. I’d like to give him a full plate, a big hug, and some positive vibes. As far as serving him, I don’t think he’s picky, so what we’ve already got would be fine I think.

That’s it! That’s my tea party. Turn up!

Thanks for a fabulous guest post Elle, I always find it so difficult to think of guests to invite to fantasy parties but you've made some wonderful choices there so I'm sure it would be an afternoon to remember!

Don't forget to check back later today to read my review of A Blade so Black and in the meantime you can visit the other blog tour hosts below: 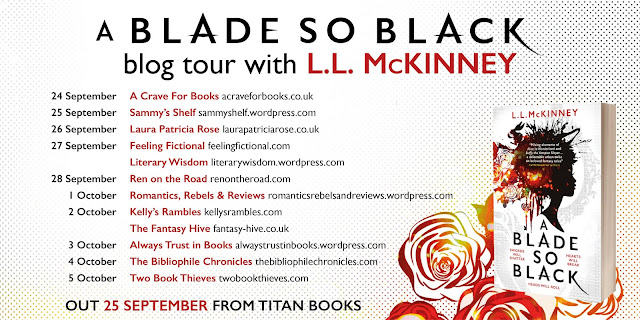