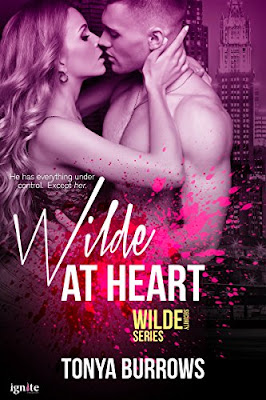 He has everything under control. Except her.

Reece Wilde put everything in his life on the backburner to protect his brothers and their struggling company, Wilde Security. With a major contract on the line, Reece can't afford any mistakes...like getting caught in a red-hot, X-rated moment with wild child Shelby Bremer, who's more trouble than he can handle. Now he's being blackmailed.

Shelby's mile-long impulsive streak gets her in more trouble than she'd like to admit. Between her sister's wedding, her coffee shop set on fire, and getting down and dirty with the groom's brother, things are definitely coming off the rails. With both their careers and their safety on the line, Reece is determined to keep them both safe...even if it means a Vegas-style shotgun wedding.

But gambling on a wild card—and a wild soul—is risky...and sometimes, it can get a guy killed.

Review:
Reese is the most responsible of the Wilde brothers and he works all the hours possible to make sure the family is financially secure. He's a tech geek and his heart belongs with his own software company rather than the family's security firm but Wilde Security can't survive without his investment and it's causing a lack of funds within his own business. His only hope is to secure more financial backing but his rich potential investor has some very conservative ideas and Reese has to keep his nose clean until the deal is signed. The last thing he needs is to get involved with wild child Shelby. It's bad enough that she's his little brother's sister-in-law but her it's her knack for finding trouble that is likely to get him into trouble. Unfortunately, after getting caught on camera at the worst possible moment Reese is now facing a potential scandal unless he can get a blackmailer off his back.

Shelby didn't have the best childhood and she made more than a few mistakes of her own but she has tried desperately to turn her life around. She has a reputation as a trouble maker but she's actually a lot more sensible than everyone gives her credit for, she's also hard working, intelligent and determined to stand on her own two feet. She's been crushing on Reese since the moment she first saw him but she is keeping so many secrets that she knows she has no hope of holding on to a relationship with him. Shelby is stuck between a rock and a hard place, she's trying so hard to do the right thing but someone has power over her and they aren't willing to let her walk away from her old life completely.

I really enjoyed getting to know these two, they are complete opposites but in spite of all their differences they're actually pretty perfect for each other. Reese can be too buttoned down and reserved while Shelby is more outrageous and fun loving but together they are much more balanced. I have to admit there were times when I was annoyed at the way Reese tried to change Shelby but that didn't last long and once he realised how special she was I loved the way he encouraged her to be herself and showed her how important she was to him. Nobody has ever really put Shelby first and it was nice to see Reese was the one who would finally break that pattern.

Wilde at Heart was a great romance with a nice amount of mystery and suspense, there is danger at every turn as the couple are trying to unravel a blackmail plot as well as figure out who is behind a spate of arson attacks all while trying to play the part of a respectable couple to woo Reese's potential investor. It was nice to catch up with the other Wilde brothers too, we see how the previous couples are getting along and also got to know the others a little better. I have very high hopes for the rest of the series and I can't wait to see them all get their own happily ever after.